What is this, 2016? A rummage around in 7th-gen iPad innards shows repurposed tech within

Bigger case means we can use even more glue! 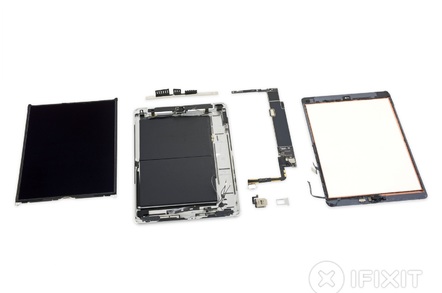 Apple's new iPad is a magical machine, able to take a user back to 2016, the year of the iPhone 7. Screwdriver demons iFixit have ripped one apart to find out just how retro the thing really is.

It is no secret that the 7th-generation iPad shares an awful lot of features with the seventh generation iPhone, including the A10 Fusion processor (just like last year's iPad). The question for those pondering a purchase is if the thing has also inherited its illustrious ancestor's 7 out of 10 repairability rating or the woeful 2 out of 10 of the iPad 6.

Bearing in mind that there remain plenty of iPhone 7s out there, perfectly capable of running apps and surfing the web, and not really needing upgrading (much to Apple's chagrin), there is a certain logic in the continuing reuse of its parts.

The teardown began well, with the larger case (10.2" compared to last year's 9.7" screened device) prized open with heat and suction. The gang also found the glass separated easily from the display, meaning that repairing the inevitable crack or two shouldn't break the bank (unlike the panels of the pricier Pro models).

The LCD is also relatively easy to remove but, alas, the good news pretty much ends there as far as repairs are concerned. Apple, according to the gang, have gone a little glue-gun-happy, with adhesive used to hold many of the parts in place.

The battery is the same unit as last year (despite the larger case), although Apple reckons more charge can be squeezed out of the 32.9Wh power pack even with the bigger screen, most likely down to more efficient chippery.

And, of course, securely glued into the side is Apple's new Smart Connector. Ideal for turning an iPad into something a bit less useful than a Surface with the aid of the "Smart Keyboard", a device that magically costs almost half as much as the iPad.

Wielding the heat gun once more, the gang prised the logic board away from its sticky sanctuary to reveal that A10 Fusion SoC, layered with 3GB of LPDDR4 SDRAM – a 50 per cent jump from last year. SanDisk provided the 32GB flash memory storage (a 128GB version is available) and the Broadcom BCM15900B0 touchscreen controller also makes a reappearance, sharing a bit of iPad Pro heritage for pencil fans.

Aside from that extra GB of RAM, screen size bump and Smart Connector, the teardown revealed little that was particularly new in the device, which starts at £349. Of course, the question remained – was repairability near the lofty heights of the iPhone 7 this time around or had it been dragged down to the level of last year's glue fest?

The gang rated it at 2 out of 10, commending the cost savings to be made when dealing with a cracked display but condemning the "obnoxious" amount of glue holding things together and the oh-so-easy-to-break Lightning port soldered to the logic board. ®