Slow your roll, your typewriters will be here anon 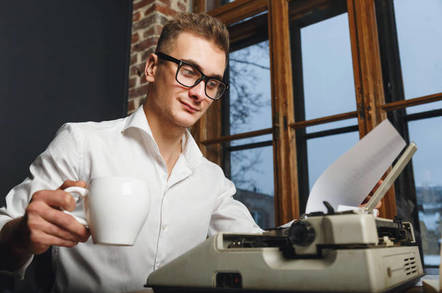 Here's the typewriter you asked for ... yep we'll grab all the new PCs. Please, it's our great pleasure...

Episode 8 "Just a little H and S thing," the Boss says, popping his head around the door to Mission Control.

"There's some cables causing problems in the design department."

"Yes, not sure what it is but maybe one of you could pop up?"

"You have a cable problem?"

"Yes - you see how they're all just hanging there around my desk?" the bloke asks. "The other day I got my shoe caught in them - and it could be a Health and Safety thing."

"I'm not sure shoe health comes under our H&S mandate," I say. "We mainly deal with people."

"Surely you'd dislodge them before you tried to stand up?" the PFY suggests.

"Yes, but sometimes I can't feel them."

"Okay, tell you what: we'll cable-clip them to your desk."

"Yes, but what if the clips come undone?"

"What if we want to move our desks?" his neighbour chirps in.

"They're nutters," the PFY finishes.

"Yes, but I still don't think you should have said that to their faces," the Boss says. "What was the real issue?"

"Electromagnetic Radiation... From the cables," I say. "Apparently, one of them overheard someone talking about the dangers of EMF and the whole office is paranoid about birth defects.

"And you thought it'd be constructive to suggest that the damage was already done and how all their parents must have lived next to power stations?"

"And what was their solution?" the Boss asks.

"Wireless. They want to take all the network and power cabling away, have a room where they charge laptops AT NIGHT, and use wireless to access the network when the machines are running on batteries during the day," the PFY says.

"1. The battery won't last a day. 2. Every user has AT LEAST 2 large screens which don't run on batteries, 3. People will just forget to charge the things anyway. 4. Wir..."

"Apparently a couple of the users have been complaining about headaches for several years and the company cannot conclusively prove that..."

"...they're not complete nutters," the PFY finishes.

"AND SO," the Boss continues, "The Company Health and Safety officer has suggested a TRIAL of wireless technology."

"I see," I say. "But we all know that wireless has radiation too?"

"Yes, but apparently the users believe this isn't so harmful as they have that in their homes and it's OK."

"And they know that laptops produce Elec..."

"And you know that if we start this trial every tinfoil hatter in the building is going to be having headaches and needing health crystals and a salt lamp just to keep going?"

"Okay," I say, handing the PFY a baseball cap with a tinfoil lining hanging a very noticeable 1/4 of an inch below the brim of the cap. "Let's go install these wireless access points."

"So we'll install six units in the ceiling covering the entire workspace," I say. "We'll test them for a few days then cut you over to them next week. These units are the business - absolutely top-of-the-line!"

"Great!" one of the halfwits says.

The PFY and I get to work installing the units and cabling them up.

"What... are the caps for?" one of the idiots eventually asks.

"Oh nothing!" I say. "We just had them around the office."

"You don't normally wear them."

"No, because we're not normally out of the office this long."

"I just notice that... they've got some sort of metallic lining," he says hesitantly.

"Yes! A dandruff treatment!" I say.

We install the points and leave the office to let the crazy ferment. The next morning we're in the Boss's office again with a couple of the blokes from the coloured pencil office.

"You need to change out the wireless access points," the Boss says.

"Because the radiation from them is causing headaches. Everyone in the office is getting them now."

"We haven't configured the wireless interfaces yet!" the PFY says. "They're not even turned on!"

"It's the type of wireless," he chips back. "The units you put in must be too powerful."

"When they're not turned on," the PFY points out again.

"We think you should be using ones like in our home."

"Oh you want domestic access points!" the PFY says. "I can pop down to Currys and get them if you like. How about reducing the number of units to three - to keep the power down?"

"I think that would be best," he says.

And that's how we got a top-of-the-line wireless upgrade for the office without the cost coming from our network hardware budget. And all it took was an overly loud conversation about EMF in the lunch line...

And if you think the paranoia's bad now, imagine what it'll be like next week after the PFY and I pop up to the users' office later this evening with a couple of heat guns and melt everything plastic within 1 metre radius of the domestic units...