By hiding most of the emails you get 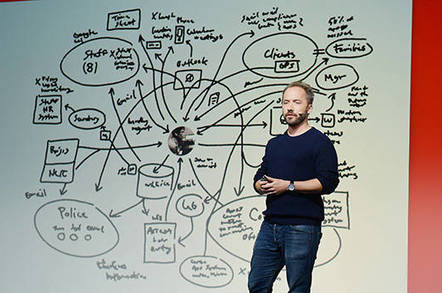 Houston: He can make sense of all this. But can you?

Analysis Feeling overwhelmed by the number of unread emails in your inbox? Frustrated that you had to trawl through 1,000 Slack messages before finding the one you were looking for? Unable to find the latest version of the presentation your team has to give tomorrow?

Well, worry no more because Dropbox is going to do all that sifting for you. Instead of the 1,000 documents directed at you, the company - if you subscribe to its service, of course - will give you “the five or ten docs you need to get up to speed,” according to its CEO Drew Houston.

How? A combination of its new service - Spaces - that will pull in messages and files from a range of other services including Slack, Zoom and Trello into one Dropbox folder and the company’s new search technology, combined with - you guessed it - machine learning and artificial intelligence.

Dropbox has certainly identified a problem and it’s also decided how it would like to try to fix it: by flagging up only the most important things you need to know, like an automated personal assistant. Whether it is actually capable of providing it, however, is another question entirely.

Houston gave a small press briefing after the official launch of Spaces in San Francisco on Wednesday and certainly has a clarity of vision. But when it comes to real-world mechanics the best we got was: “If you open the same file every Wednesday then we will be open to put that at the top when you log in.”

That’s great - but will it actually happen? Probably not. Much of this wonderful future capability, like a lot of Silicon Valley announcements these days, is predicated on artificial intelligence capabilities that simply don’t exist right now.

Like self-driving cars and immersive virtual reality, we can all talk about what it will look like and how wonderful coming technologies will be, but when you try to make it actually happen, the result is usually motion sickness and dead pedestrians. When it comes to information, the casualties are going to be all the hundreds of messages and documents that Dropbox doesn’t show you; messages that will effectively be thrown in the trash.

But when even a monster like Google - whose entire technological center of balance is built around search - has trouble making that a reality, you have to wonder how Dropbox is going to pull it off.

Houston’s favorite description of his company’s new service is “calmer.” We ask him what will be calmer about it. “Better design, the most important stuff showing up first, you won’t be bombarded or have to switch apps, or have information overload,” he explained, adding: “Email made a lot of sense when you got five emails a day, but not when you get 500 a day.”

One thing Dropbox does have is better design. It is clean and simple. But that is also a product of the fact that it only does a few things. As every software company in history knows, the more features you add, the harder it gets to keep things clean. Apple is a master of simple design but even it has fallen over in recent years, as indicated by the endless web pages that exist to walk you through how to find specific features on your iPhone, for example.

Apple often finds itself deciding for you what you want to do, to keep the design simple. Which is great, until you want to do something different. Google on the other hand tends to give you all those options - and that results in the kind of clutter that can drive you mad.

Houston argues that by pulling everything into one space, companies will be able to ensure that “less stuff is generated.” And he may be right: you may no longer need to send that email telling your team you have updated the presentation, or look at the instant message telling you that, great, yes, I’ve seen your email.

But that doesn’t account for the rest of the mountains of communication that we all generate and receive these days. Houston appears to believe he can overcome all of that by using artificial intelligence. So we ask him about the biggest problem that comes with AI: bias.

He sidesteps the question: “We’re at the frontier of AI right now, and that is something that the field of AI will have to answer more broadly.” But, he adds, clearly thinking about issues like facial recognition but wisely deciding not to go down that route, “I think what we do [i.e. share people’s self-created information] is less of a fraught situation.”

He’s right. Unless of course you’ve bet your company’s future health of getting companies to trust you to filter your internal communications to only what’s most relevant. Because if the five to ten documents you are given at the top of your new Dropbox Spaces page don’t include the one from your boss, or your biggest client, well, then that’s going to make for some fraught situations. ®

Azure Dev Spaces has hit public preview, so El Reg took it for a spin

Or, if you will, an arthritic stagger around the park

And this time it's caught up by adding data de-duplication

What the fdisk? Storage Spaces Direct just vanished from Windows Server in version 1709

Now you see it, now you don't

This is why Windows Server 1709 left it out. While you wait, have proper SCOM crypto