Roscomos: We know all about how the hole in the Soyuz went down, but we're not telling you

Plus: Who needs a visa to Europe when you've got a Space Bridge? 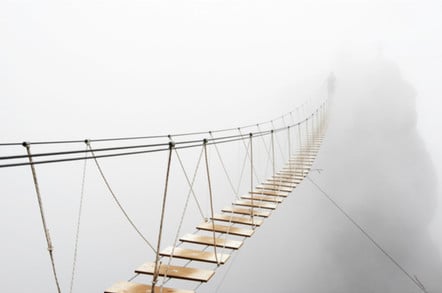 Roundup While NASA splashing the cash on Orion modules may have grabbed the headlines, the fate of India's lander continued to perplex, assembly of the Space Launch System continued and Blighty pondered a Space Bridge.

The last of the five main sections that make up the core stage of NASA's Space Launch System (SLS) rocket was attached at the agency's Michoud Assembly Facility (MAF) in New Orleans last week. The final join means the monster is ready to receive four RS-25 engines left over from the Shuttle programme, along with avionics.

The engines are fed from two liquid-propellant tanks and lead contractor Boeing, along with Aerojet Rocketdyne, responsible for those RS-25s, will connect the power plants over Autumn.

Jennifer Boland-Masterson, Boeing's operations director at MAF, said: "Boeing expects to complete final assembly of the Artemis I core stage in December" – at which point the stage will be shipped by barge to Stennis Space Center where it will be installed into the B-2 Test Stand.

The stand notably saw service testing the first stage of the Saturn V.

Should the Green Run testing go well, the stage will eventually be used to send an uncrewed mission around the Moon. Some in NASA still cling to the hope that this might occur before the end of 2020, but a date in 2021 seems more realistic.

The team expects things will be easier second time round, when building the core stage for Artemis II, which will take astronauts around the Moon. Boland-Masterson added: "Lessons learned and innovations developed in building the first core stage are making the second one progress much faster."

Good news! We know what caused the hole in the Soyuz! Bad news... Actually, in Russia there is never bad news...

Russian news orifice RIA Novosti reported that national space agency, Roscosmos, had worked out what had caused the hole in the habitation compartment of Soyuz MS-09... but it wouldn't be sharing the information publicly.

I knew it! I knew it would end like this! #Rogozin about the hole in #SoyuzMS09: “The hole was in the Habitation module, it burned long ago during the reentry. We took all samples. Everything is clear to us what happened, but we will not tell you anything” https://t.co/GxSLyYmPHV pic.twitter.com/BsLmvm94no

One can but hope that the information was shared with NASA. After all, Soyuz MS-15 is due to launch this week and the crew – Commander Oleg Skripochkam, NASA astronaut Jessica Meir and UAE "space flight participant" Hazzaa Al Mansuri – would no doubt prefer not to imagine someone getting handsy with the drill and filler on the Soyuz production line.

While the silence is not surprising, it is a little disappointing. Speaking to the Houston Chronicle, NASA Watch blogger Keith Cowing attributed the secrecy to Russia's embarrassment, although noted that the issue was swiftly remedied without risk to the crew.

However, he added on NASA Watch: "I do find it odd that the Russians are so upset about a minor drilling error yet they just flew a humanoid robot to ISS and let it use a power drill. It also shot guns on Earth. Just sayin'."

The UK Space Agency has announced plans to build on its existing relationship with the Australian Space Agency to create a "Space Bridge".

Sadly, anyone imagining something along the lines of sci-fi's space elevator will be disappointed. The agency's plans are along the lines of the existing FinTech bridge: creating an agreement aimed at increasing collaboration and oiling the cogs of trade between the countries.

Harking back to the golden age of British rockets launching from Woomera back in the 1950s, Dr Graham Turnock, CEO of the UK Space Agency, hoped the agreement would facilitate "new trade and investment opportunities and the exchange of knowledge and ideas".

With the UK satellite and space industry nervously eyeing a possible Brexit that could leave Blighty needing to negotiate new agreements with old trading partners, Australian opportunities will be most welcome.

India, statistics and the mystery of the missing lunar lander

NASA's Lunar Reconnaissance Orbiter (LRO) appears to have failed to snap India's stricken Vikram lander as hopes faded that the spacecraft or its rover would call home before the arrival of the lunar night, which would spell the end of the mission as originally planned.

While LRO imagery is freely available, pictures captured by Indian space agency ISRO's orbiter Chandrayaan-2 purporting to show the lander have yet to be made public.

Instead, it appears that Indian Space Research Organisation (ISRO) has been tinkering with what defines "success" as officials are reportedly claiming a 95 per cent or even a 98 per cent success figure for the mission.

It would be difficult to regard the rover as anything other than a total write-off at this stage, although Vikram itself did perform well during descent, up until an apparently harder-than-expected landing.

The orbiter, on the other hand, has continued to perform well.

If one excludes that pesky lander and rover then such a figure is plausible.

While the cameras on the Voyager probes have long been turned off, shortly (relatively speaking) after launch, Voyager 1 was tasked with photographing the Earth and Moon. It was the first time the duo had been caught in the same frame.

42 years ago #today, Voyager I captured this historic image-- the first time the Earth and Moon had been photographed in the same frame. 11.66 million kilometers (7.25 million miles) from Earth, the spacecraft was directly above Mt. Everest at the time. pic.twitter.com/VtS4JkkGEJ

The spacecraft was a mere 11 million kilometres or so from Earth at the time, and would go on to fly past Jupiter in 1979, and Saturn and its Moon Titan in 1980. The probe launched on 5 September 1977, just over two weeks after Voyager 2's 20 August launch.

Japan finally managed to get the H-II Transfer Vehicle (HTV) 8 into orbit yesterday after a premature fire at the base of the H-IIB rocket due to send the thing to space held things up somewhat.

The cause of the unexpected fire was put down to oxygen dripping from the engines during propellant loading coupled with static electricity. "Corrective measures" were implemented, and the launch rescheduled.

HTV-8 is due to arrive at the International Space Station (ISS) on Saturday, where it will be captured by the outpost's Canadarm2 robotic arm and installed on the Earth-facing port of the Harmony module.

As well as experiments and supplies for the laboratory, HTV-8 is also carrying six new lithium-ion batteries, which will replace the existing nickel-hydrogen units on the ISS's far port truss segment during spacewalks and robotic operations planned for the later this year. ®