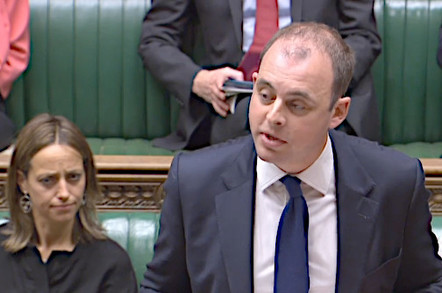 At today's first Parliamentary sitting since the Supreme Court overruled prorogation yesterday, Department for Digital, Culture, Media and Sport (DCMS) minister Matt Warman (a former tech editor of the Daily Telegraph) was sent in to bat on behalf of Johnson – and thus Hacker House.

Hacker House was promised £100,000 in January as part of a government fund to "help drive diversity in cybersecurity", as Labour party deputy leader Tom Watson MP noted in Parliament.

MPs were told that so far it has received £47,000, with the remaining £53k frozen until further notice.

The Sunday Times reported at the weekend that Johnson, when he was Mayor of London, was a personal friend of Arcuri's, took her on trade missions and helped secure a total of £126,000 in public funding for her business.

"We are of course aware of claims raised by The Sunday Times and the department is reviewing its decision," Warman told the House of Commons, following a febrile Q&A session with attorney-general Geoffrey Cox about Brexit.

Follow-up reporting claimed that a "friend" of Arcuri's said Johnson only visited her flat to "understand tech" and "get educated", with her stepfather stating: "No way would there have been a sexual relationship."

A DCMS press release from January about Hacker House's funding stated: "The aim... is to boost not only the total number, but the diversity of those working in the UK's cybersecurity industry. It will help organisations develop and sustain projects that identify, train and place untapped talent from a range of backgrounds into cybersecurity roles quickly."

A statement in Arcuri's name distributed as part of the same DCMS press release said: "The team of Hacker House are thrilled to be included in the funding of this grant as this allows us the opportunity to continue to develop content that trains and enable candidates to retain practical skills needed for roles within information security."

None of this cut much ice with Parliament today.

Doggedly, Warman, who was on his first ministerial outing at the despatch box, insisted there was "no undue lobbying to the best of my knowledge… there was no evidence that the prime minister intended to do anything improper whatsoever."

Lib Dem MP Layla Moran commented in Parliament that Hacker House "is not based in the UK", Arcuri having moved to the US in 2018, and said that the person living at the company's UK registered address "is in Cheshire where she used to rent", adding that the "current occupant sends post for Miss Arcuri back to sender."

"What steps," asked Moran, "did [DCMS] take to ensure Hacker House was based and operating in the UK? Why did officials waive the rule that the grant couldn't exceed 50 per cent of the company's income? Did the prime minister… make any representations to the department recommending Hacker House for this funding?"

Warman replied: "The prime minister and his staff have absolutely no role in the award of this grant and I suspect I'll be saying that a number of times."

Deputy Labour Party leader Tom Watson chipped in later in the Parliamentary debate to say: "The minister [Warman] suggested that I try to register with Hacker House. I looked at social media and there are many people who tried to do that and they get an error message, 502 bad gateway. Can he explain why Hacker House seems to have disappeared?"

Put on the spot, Warman stuttered back: "It – it is of course a part of this department's processes to make sure the services we procure are properly delivered and we will continue to do so."

It appears to El Reg that Hacker House's website is loading, albeit very slowly, suggesting the sustained public interest is causing its servers to wobble rather than anything nefarious. Plenty of screenshots of HTTP 502 error messages for the hacker.house domain can be found on Twitter.

We have asked Hacker House – which is apparently based in California, USA, with some presence in the UK – whether the company wishes to comment and will update this article if we hear back. ®