Yeah, well, tough, you get a brand rejig instead 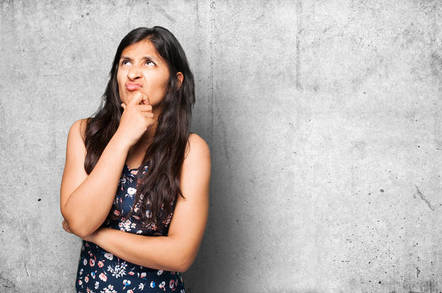 Logowatch Remember Yahoo!? It used to be Google but failed to get better, keep current, or do anything useful.

You must remember: it bought two monster internet brands – Flickr and Tumblr – and ran them into the ground. No? It rebooted itself with Google exec Marissa Mayer who spent years chasing rainbows before being pushed out the plane with a $186m $55m golden parachute.

Nothing? It was forced to admit that every single one of its three billion webmail accounts was compromised by hackers… Come on, you must remember. Anyway, it still exists, albeit as a subsidiary of Verizon, and it has some very exciting news.

No, it isn’t offering a search engine that respects user privacy; no, it hasn’t developed a news service that rewards journalism over clickbait; no, it hasn’t revamped its legacy email service to be useful; no, it hasn’t found a social media sweet spot; it’s done something much, much better than that.

It has redesigned its logo.

That’s right. Gone is the outdated logo of old. No more capital letters (so noughties!). No more single letter ‘Y’, or speech bubbles, or emojis. Instead, what we have is an incredibly bold, brave, and exciting reimagining of a beloved brand that just might single-handedly relaunch the company anew like an internet phoenix.

Alternatively, it may have simply lowercased the name in the dullest, most generic sans-serif font imaginable. Even Verizon’s dull-as-ditchwater logo has a snazzy “z” in it.

And what else? Well, nothing actually. That’s it.

The web biz claims the rebranding is “a sign of bigger, more important changes in the works,” and Verizon execs have used the unveiling to promise that it is “rolling out a series of new products and features to help you get more of what you love.”

And it may be right... if what you love is pondering how yahoo! managed to screw up so badly for so long.

If there is one thing that yahoo! has taught us all, however, is that while the internet may be dynamic, us humans are creatures of habit. The company’s homepage is still the 11th most visited website on the internet despite, well, the page itself.

For example, the second highest news story on its homepage is actually an ad for stock trading posing as a news story. Only the word “Ad” in light grey indicates otherwise. It’s a fitting tribute for a company that sold what little soul it had for a handful of magic beans that turned out to be, well, Beenz.

And in case you’re wondering what happened to Marissa Mayer, she’s now co-founder at Lumi Labs “a technology studio focused on the intersection of consumer media and artificial intelligence” – which, let’s be honest, reads like a spoof description from HBO’s Silicon Valley. She’ll be a judge at a startup pitchfest contest in San Francisco next month. ®