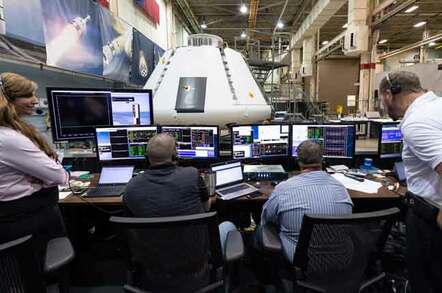 Texas Senator Ted Cruz hailed "a great day for the men and women at Johnson Space Center" as NASA awarded the contract for building Orion spacecraft to Lockheed Martin of Littleton, Colorado.

For the doubters, this is it: the production line has been set in motion for the first mission to put astronauts on the Moon since Apollo 17 in December 1972. NASA has committed to achieve this within the next five years with its Artemis mission project.

The Orion Production and Operations Contract (OPOC) is a rolling contract that expects Lockheed to manufacture a minimum of six up to a maximum of 12 Orions under the oversight of its own team based at Johnson, in Houston, Texas. OPOC's ordering period leads all the way to 30 September 2030.

A dozen Orions doesn't specifically mean a round dozen Artemis missions are on the cards, though. There could be more. Spacecraft design these days has to factor in a certain measure of reusability in order to keep costs down: the plan is to recover and reuse each crew module at least once.

For example, components such as seats, panels and valuable electronics used in Artemis II are expected to find their way into Artemis V; parts recovered from Artemis III will end up being reflown in Artemis VI; and so on.

NASA's initial OPOC order, costing $2.7bn, is for three Orions as soon as possible to cover Artemis missions III, IV and V. The next three will be ordered in 2022 for Artemis missions VI, VII and VIII at a projected cost of $1.9bn.

Also included within the contract award is the production of Gateway, NASA's lunar-orbiting spaceship.

"Today's announcement signals that we are moving closer towards operation and production," observed Texas Representative Brian Babin. "While I look forward to learning more of the details, it's encouraging to see that this program is moving along as it should be."

Mark Kirasich, Orion Program manager at Johnson, said: "No other spacecraft in the world can keep humans alive hundreds of thousands of miles from Earth for weeks at a time with the safety features, crew accommodations, technical innovations, and reliability that Orion provides.

"With the design and development phase of Orion largely behind us, this new contract will enable us to increase efficiencies, reuse the spacecraft, and bring down the cost of reliably transporting people between earth and the Gateway."

Ultimately, if the missions go to plan, Artemis will lead from the Moon to Mars – as long as future US governments do not suddenly pull the plug. Remember, this is only happening because Trump's administration stumped up the cash. ®