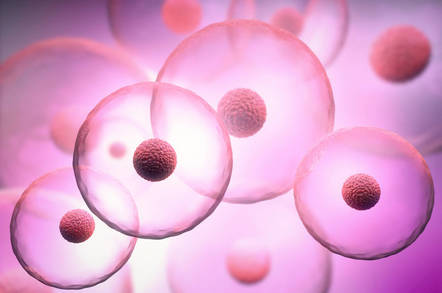 A tiny laser, a thousand times thinner than the average single strand of human hair, might be able to slip inside microprocessor chips or take closeups of human tissues one day, according to a paper published in Nature Materials.

The system emits near infrared or visible light just 50 to 150 nanometers wide. A team of researchers led by Northwestern University in the US fired off infrared wavelengths to excite ytterbium ions. The energy emitted was then absorbed by erbium ions, which go on to emit pulses of near-infrared and visible light.

Longer wavelengths are normally needed to image bodily tissues but visible light can still penetrate through cells, explained Teri Odom, professor of chemistry and co-lead of the project. "Longer wavelengths of light are needed for bioimaging because they can penetrate farther into tissues than visible wavelength photons.”

"But shorter wavelengths of light are often desirable at those same deep areas. We have designed an optically clean system that can effectively deliver visible laser light at penetration depths accessible to longer wavelengths."

The system is mostly made out of glass, a material that won't degrade in the human body. It can also be placed inside chips or used as sensors in smartphones, according to the paper. Nanolasers are normally less efficient than larger lasers and normally shorter ultraviolet wavelengths with more energy to in order to operate.

"This is bad because the unconventional environments in which people want to use small lasers are highly susceptible to damage from UV light and the excess heat generated by inefficient operation," said P James Schuck, an associate professor of mechanical engineering at Columbia University, who also helped lead the project.

Since the nanolaser shines at longer wavelengths, it produces less heat so it can be placed inside chips or smartphones. "Excitingly, our tiny lasers operate at powers that are orders of magnitude smaller than observed in any existing lasers," he added. ®