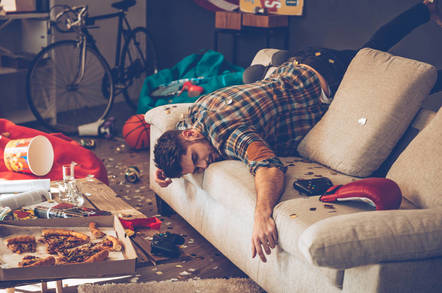 Do you ever feel drunk, even though you swear you haven't touched a drop of alcohol at all? Well, your gut might be harbouring a type of bacteria that brews booze as a byproduct.

A team of Chinese scientists have written about the phenomenon after finding a patient with odd symptoms. Every time the individual consumed high levels of carbohydrates, their blood alcohol concentration levels shot up to a 400mg/L – considered a high blood alcohol concentration – despite keeping an alcohol-free diet. They also found excess amounts of Klebsiella pneumoniae in their gut, a type of bacteria that produces alcohol from sugar and is normally kept in balance by the microbiome in the gut.

That might not sound so bad, you might think. No need to buy that beer with your burger, just eat the bun and get a bit tipsy for free. But some things are just too good to be true. The patient was suffering from fatty liver disease, a condition that causes fat to build up in the largest organ in your body as well as inflammation and damage to cells. Scar tissue can accumulate, causing cirrhosis or even liver cancer. And excesses of the bacteria only accelerates the disease as well as the autobrewery syndrome.

"We found that this effect on the individual's BAC was due to bacteria rather than a fungal infection because anti-fungal treatments had no effects on this parameter," the researchers wrote in a paper published in Cell Metabolism. "From this individual, we isolated and identified strains of Klebsiella pneumoniae that were strongly associated with endogenous alcohol production."

Next, the team studied a cohort of 43 other patients with fatty liver disease and discovered that 60 per cent also had high concentrations of the bacteria floating around their guts.

They also performed experiments with mice. The animals were infected with the microbe by way of faecal transplants. When they were fed glucose, their blood alcohol concentration increased leading the researchers to associate Klebsiella pneumoniae with fatty liver disease.

Thankfully, the effects of the bacteria can be curbed. After the original patient was treated with a course of antibiotics and made changes to their diet, the symptoms from fatty liver disease alleviated. ®