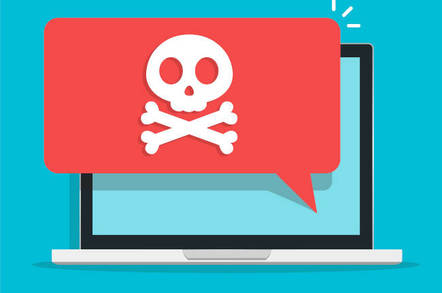 Two Americans used bogus virus-infection alerts to bilk $10m out of PC owners, it is alleged.

Romana Leyva, 35, of Las Vegas, Nevada, and Ariful Haque, 33, of Bellerose, New York, were each charged this week with one count of wire fraud and conspiracy to commit wire fraud. Each count carries a maximum of 20 years in the clink.

According to prosecutors in southern New York, Leyva and Haque masterminded a classic tech-support scam that warned netizens their computers were infected with malware that didn't actually exist, and would need a costly, and yet entirely unnecessary, repair.

We all know this type of scam: phony "system alert" pop-up ads in web browsers that try to scare punters into believing their machine is riddle with spyware, along with a phone number to call for "tech support" or a repair service that costs an arm and a leg – and doesn't actually do anything useful.

"In at least some instances, the pop-up threatened victims that, if they restarted or shut down their computer, it could 'cause serious damage to the system' including 'complete data loss'," the prosecution wrote in its court [PDF] paperwork.

"In an attempt to give the false appearance of legitimacy, in some instances the pop-up included, without authorization, the corporate logo of a well-known, legitimate technology company."

While not particularly novel or remarkable in its tactics, the alleged scam was ridiculously effective, netting the duo an estimated eight-figures in ill-gotten gain, it is claimed.

This may have been, in part, due to the target audience of the ads. Prosecutors claimed Leyva and Haque deliberately aimed their bogus pop-ups and adverts at elderly netizens who were more likely to know little about their machines and thus be prone to falling for the tech support fraud.

In addition to scamming the marks for one-time support costs, it is alleged the duo also got recurring payments by signing victims up for subscription services and, in some cases, they were said to have gone into outright bank fraud by telling victims the support company had folded and asked for account details in order to deposit a "refund" that, of course, turned into a withdrawal.

"The conspirators allegedly caused pop-up windows to appear on victims’ computers – pop-up windows that claimed, falsely, that a virus had infected the victim’s computer," said US attorney Geoffrey Berman.

"Through this and other misrepresentations, this fraud scheme deceived thousands of victims, including some of society’s most vulnerable members, into paying a total of more than $10 million."

Both men have been cuffed, charged, made their initial court appearance, and are now awaiting trial. ®