BOFH: What's the Gnasher? Why, it's our heavy-duty macerator sewage pump 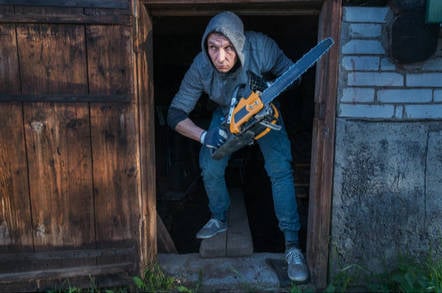 What? This is how we always get into the Basement...

Episode 7 "We need you now!" the Boss says, bursting into Mission Control early one morning.

"To the basement, Robin!" I cry, as the PFY and the Boss follow me to the lift.

A couple of minutes later, I've taken the padlock off the door to a cold and clammy plant room in the Sub Basement, which has a very intense smell to it…

"What is this place?" the Boss asks, looking around the mostly empty room, eyes stopping at a yellowed piece of kit connected to about 100 wires cast into the concrete wall. "…And what is that?"

"This is the original aircon plant room," I reply, "and that is the original BMS system. Well, the wires are. The computer's relatively new in comparison – probably mid-to-late '80s. A DOS PC with 128k of RAM, an ST225 hard drive and a VERY proprietary ISA card. That mass of cables talks to the card and the card talks back. When it's going the green light is on, when it's not, the shit hits the fan. And I mean it when I use the words shit and fan."

"Red," the PFY says, standing up from his crouched position. "No, green."

"So bicycle clip time," I say.

"It also operates all the interlocks for fire alarms to tell the lift to return to ground, fresh air fans to turn off and magnetic door holdbacks to release. It probably does a bunch of other stuff, but today's problem is the PC. If it's not running soon there will be bigger problems."

"Can you fix it?" the Boss asks nervously, no doubt suppressing the urge to dash the 50 or so steps to his car and get out of dodge till it all blows over. So to speak.

"NO!?" he says, casually patting his trouser pocket to make sure he has his car keys with him.

"No," the PFY says reluctantly. "But… we know someone who can. Though it'll be costly."

"Yep. An old bloke who simply loves old PCs. A hoarder type who could tell you the pinouts of an RLL controller from memory – if he could spare the time away from discussing the merits of PC-DOS versus MS-DOS."

"How much time do we have?"

"Until, you know, it happens?"

"You mean until the condensate stacks back up so much the pressure knocks the cap off our waste pipe again and/or backs up into the fresh air ducting? Maybe three to four hours."

Two hours later, our man is in the basement looking at the kit.

"Beautiful design," he says, spotting the card in the machine.

"Yes, that's what you said when you came five years ago," the PFY says. "Can you fix it?"

Now this guy is one of those highly strung types – no doubt with a short fuse, a bedroom full of ancient PC gear and a back garden full of the bodies of the schoolmates that looked at him funny, so we want to keep on his good side.

"The Boss will drive you as we're in a bit of a hurry," the PFY says, angling for the two-birds-with-one-stone murder-suicide plan.

Forty minutes later, they're back and the Boss is rather subdued – likely having sat through a 35-minute monologue on how 1.44 megabytes is the computing equivalent of crossing the streams. However, the green light is on, there's a rhythmic thumping noise from the floor of the basement and the air has lost that tangy taste.

I'd call that a win.

Our man scratches out a bill on an ancient invoice pad and hands it to the PFY.

"Thanks very much," the PFY says, pocketing the invoice.

"How much was it?" the Boss asks as we ride the lift back up to Mission Control.

"It was a bargain," I say. "Those cards are almost impossible to find, and they typically run for five to eight years, so just call it 500 quid a year."

"I'm not authorising that!" he snaps.

"We'll look on eBay!" he says, pushing the B2 button on the lift.

"Now I've had the PFY pop upstairs to get the approvals form, and we'll slip that under the door to you," I shout.

"When you've signed it, slip it back and we'll take it up to payments and get them to cut a cheque – if they still have a chequebook. Then – and only then – I'll flip the breaker to turn the PC back on."

"You won't get away with this!"

"You see those holes in the condensate pipes about ceiling level?" I ask. "They made us put them in after the last time. That's where the condensate overflow comes out. Only if the macerating pump is off for too long, it won't be just condensate that comes out. I don't want to rush you but you might want to consider the post-lunchtime rush on the toilets."

Barely a minute later the PFY had returned, the form had been signed and he went off off to take payment.

I feel a little bad about breaking the key off in the padlock now.  Even more so, considering it's the switchboard key too.