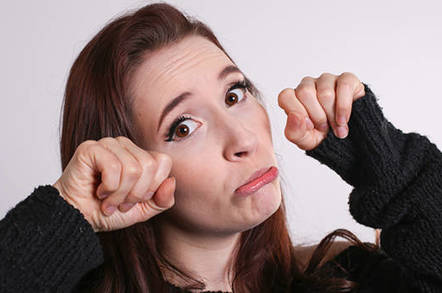 A call-center scammer has lost his appeal to overturn a $9m fine – after a court pointed out the crook had specifically waived the right to appeal when he pleaded guilty.

Viraj Patel was part of a large India-based criminal enterprise that conned tens of thousands of Americans out of hundreds of millions of dollars: the swindlers would cold-call citizens and pose as US government officials demanding payment for unpaid taxes.

The unlucky victims were threatened with fines, arrests, or deportation if they didn’t cough up: one 85-year-old woman ended up paying the fraudsters $12,300 after she was threatened with a stretch behind bars for phony tax violations. More than 60 suspect con men were charged [PDF] with conspiracy to commit identity theft, false impersonation of an officer of the United States, wire fraud, and money laundering.

In 2018, Patel, then a 33-year-old loser living in California, reached a deal with prosecutors: in exchange for pleading guilty and avoiding a lengthy trial, he would spend up to 165 months, or about 14 years, in the clink followed by three years of supervised release, plus receive a court order kicking him out of America when his punishment is over – and, to top it all off, an $8.97m fine.

He admitted his crimes, specifically, one count of money laundering – since he is based the US, his job in the caper was to launder roughly $4m to $9m of victims' cash – and was sentenced.

But, it turns out that he wasn’t listening very carefully to either his lawyers or the federal district judge who sentenced him in Texas, because Patel was seemingly convinced he was only going to have to pay $250,000. When he realized the real fine was actually $9m, he tried to undo his guilty plea, and appealed to the Fifth Circuit claiming a miscarriage of justice.

“He contends that his guilty plea was unknowing and involuntary because the district court did not advise him of its authority to order restitution,” the appeals court notes in its judgment [PDF] earlier this week.

And, amazingly, Patel is right – in part at least. At his rearraignment, the Houston court “did not advise Patel of its authority to order restitution,” the appeal judges ruled. Patel had picked up that the district court was only allowed to fine him a maximum of $250,000 – and seemed happy to take the hit.

As a man who clearly placed money above everything else, after learning that he’d only face a $250,000 fine when he had conned people out of millions, the crook stopped paying attention. And so he didn’t notice when both his own lawyers and the court subsequently informed him that the real amount he would be on the hook for – thanks to the court’s ability to force repayment of money stolen from others – was going to be much higher.

“The plea agreement advised Patel of the possibility of restitution and that he would be held responsible for a loss amount between $3.5 million and $9.5 million," the appeals bench noted. "At rearraignment, Patel agreed that the district court correctly stated the terms of the plea agreement, and he signed the agreement in open court… In addition, the PSR and the district court at the sentencing hearing stated the exact amount of the restitution award, and Patel did not object.”

He also wasn’t paying attention when his lawyers and the court informed him that he was waiving the right to appeal the judgment when he signed the guilty plea.

“Patel argues that the appeal waiver was not knowing and voluntary because the district court did not advise him that the waiver covered any potential restitution order,” the appeal court said on Tuesday, before noting: “The record reflects that Patel knew he had the right to appeal and that he was voluntarily waiving that right by entering the plea agreement.”

Patel tried to argue in his appeal that had he known he was going to be forced to pay $9m, rather than $250,000, he would have pleaded not guilty and therefore, in his eyes, he has suffered a terrible miscarriage of justice.

You’ll be amazed to hear that the appeals court judges didn’t feel quite the same way. “Patel did not ask any questions or express any confusion concerning the appeal waiver. Accordingly, to the extent Patel challenges the restitution award, his challenge is barred by the appeal waiver, and the Government’s motion to dismiss the appeal is granted as to this portion of the appeal,” the judgment concludes.

Wow, that must really suck for Viraj Patel. Just imagine working really hard for years and then having your life’s savings taken away from you just because you didn’t pay enough attention to what someone was saying.

We’re going to file this one under Poetic Justice. ®