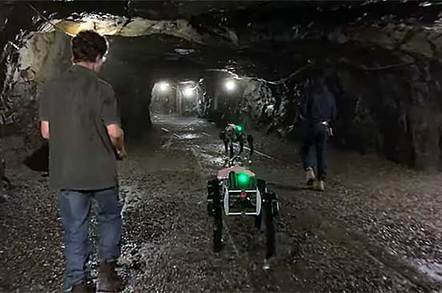 An autonomous dog-like robot designed to scamper down tunnels on search-and-rescue missions was put to the test in the most recent bout of US military boffins' DARPA Subterranean Challenge.

Although it wasn't a winner on the day – stumbling into a buried trip hazard after a quarter of a kilometre didn't help – the Team PLUTO doggie managed to find its way around, negotiate dead ends, and recognise key objects such as fire extinguishers. Lacking the benefit of prior directions, the team's co-ordinated robots 3D-mapped the tunnel environment as they progressed.

The DARPA SubT Challenge is designed to encourage self-funding teams to develop fresh approaches to navigating different types of underground mazes, both real ones – natural or man-made – and virtual.

Can't dance? That's no excuse. Let a robot do it for you at this 'forced exoskeleton rave'

The main event requires operators to remain outside while the devices head off into the cave alone, tracking them remotely from the entrance.

Many competitors employ airborne drones to map the environment and wheel-based robots to navigate difficult terrain, and the devices are often paired up. But Team PLUTO's Ghost Robotics Vision 60 won our hearts simply for being so cute as well as clever, so very clever, very, very clever, who's a clever boy then? You are.

You can watch some of its antics at the event here:

We wonder whether the next generation of the SubT Challenge should involve dragging victims away from a rockfall before scurrying off to find the nearest rescue cowboy.

For the curious among you, Team Explorer were the eventual winners of DARPA's SubT "Tunnel Circuit" Challenge with this four-wheeled monster.

DARPA is still accepting submissions for self-funded teams to compete in the upcoming Urban and Cave Circuits. ®