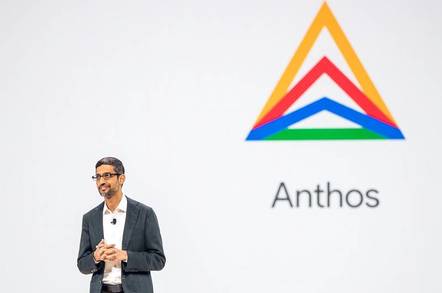 Google talked up new features for Anthos, its take on hybrid cloud, at an event in New York earlier this week.

But what is Anthos – and is this not what we already have, in the form of the Istio and Knative projects?

The answer is that Anthos is not really a technology, but more of a brand, a wrapper around Google's cloud crown jewels, Kubernetes (K8s).

Kubernetes is an open-source project, but was invented by Google, and seems poised to take over from VMs as the standard infrastructure, or API for infrastructure, on which applications are deployed.

Google is making the most of its K8s advantage in an effort to catch up with Amazon Web Services (AWS) and Microsoft Azure, both of which are well ahead in terms of cloud market share. AWS and Azure have their own K8s services, but Google K8s is the core of its gambit, not just another service.

Anthos, which was announced at the company's Cloud Next event last April, is a variant of hybrid cloud based, of course, on K8s.

In a nutshell, Anthos is the GKE (Google Kubernetes Engine) deployed on-premises in a certified configuration (via hardware suppliers such as Dell and HPE), with an agent installed that maintains an encrypted connection to Google Cloud Platform (GCP). That agent lets you manage your Anthos cluster and its workloads from the GCP console, deploying and scaling applications. Anthos relies on good connectivity to GCP – for example, using Google Cloud Interconnect.

Although there are some parallels with Microsoft's Azure Stack, which lets you deploy Azure services in your own data centre, the approach is different. Azure Stack is a bundle of different services, including VMs, SQL databases, Azure Functions (serverless code deployment) and web or API applications.

Anthos by contrast is more of a blank canvas on which you can install anything that runs in a container, including applications from the GCP marketplace. It is more like Azure Stack with just Azure Service Fabric installed – Microsoft's own microservices platform, on which much of Azure is built. Unlike Google, though, Microsoft has failed to make Azure Service Fabric an industry standard.

Just as Azure Stack does for Microsoft, Anthos brings consistency by making managing application workloads on-premises very similar to managing them on GCP.

Anthos can handle legacy workloads via the ability to run VMs in a container on K8s. The Migrate for Anthos service will migrate VMware or Google Compute Engine VMs.

Going back to the recent announcement, Anthos Service Mesh (in beta) is indeed based on Istio, and Cloud Run for Anthos on Knative. What Google is doing is packaging these technologies with consoles and APIs to make them easier to use.

The announcements themselves do not amount to much. However, Anthos is at the heart of the company's cloud strategy. The question now is how successfully Google can take advantage of K8s to build its enterprise footprint. ®