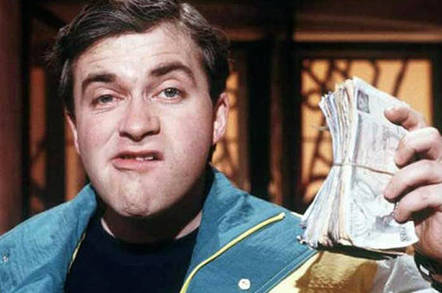 A day after Adobe posted hugely profitable Q3 results, its share price dropped by as much as 5 per cent (~$270) and has been bouncing around the sub 3 per cent mark (~$275) for the remainder of trading.

The headline figures [PDF] look swell and Adobe chairman, president and CEO Shantanu Narayen may as well have been replaced during the earnings call by Brit comic Harry Enfield's Loadsamoney.

The company's revenue for the three months ended 30 August hit record levels at $2.83bn, up 24 per cent year-on-year. The Digital Media segment was responsible for $1.96bn, of which $1.65bn was from Creative Cloud (Photoshop and all its many friends) and £307m from Document Cloud (Acrobat etc). The Digital Experience segment (corporate web stuff, CRM and the like) brought in $854m, an increase of 34 per cent on Q3 a year ago.

Raw figures revealed $2.54bn pouring in from subscriptions alone. Users trapped in Creative Cloud (CC) subscriptions – paying for wads of software they don't want alongside the one or two items they're obliged to rent because everyone else is – must be overjoyed at Adobe's riches. The bottom line for Adobe was perky, up to $792.7m from, er, $666m.

So why the slide, small though it is, in the share value?

One reason might be Adobe's admission that its purchase of Marketo for its market automation software last September for a snip at $4.75bn hasn't come up trumps yet: "Subscription bookings growth in the mid-market did not meet our expectations," said Narayen. There were also delays in Analytics Cloud subscription bookings which affected revenue from the Adobe Experience Platform.

But that's OK, said Adobe, it'll all be sorted out in Q4, when Digital Experience subs bookings will magically soar by 20 per cent year-on-year.

Maybe, but there wasn't any hard data to support the theory, just a lot of grammatically vacant talk about "increasing our focus" and "enhanced innovation" along with earnest nodding. Ordinary shareholders can handle uncertainty but they don't like vagueness. See Brexit.

A lower than expected general outlook for Q4 won't have helped its market cap: Adobe forecast revenue of $2.97bn for its final quarter of the current fiscal that came in below analyst estimates of $3.03bn.

At the user end of the scale, those who fund the most profitable cash-cow of the business, CC, are beginning to mutter. Adobe users tend to get unhappy rather than angry, but there is a growing feeling that they are not seeing enough of that "enhanced innovation". Beta testers complain of a "snooty and contemptuous attitude" of Adobe's developers in India.

Speaking on InDesign's 20-year anniversary at the end of August, Belgium-based Branislav Milic, a longtime user and trainer, observed: "The most faithful voluntary evangelists have given up on the adventure and the beta programme is not even followed by those who were its most relevant contributors. One of them, a well-known name in the InDesign world, explained to me that 'the beta forum has turned into complete nonsense'."

The problem for CC subscribers is that they can't easily walk away from Photoshop, InDesign and Illustrator in a huff when there are no alternatives. The likes of Affinity Photo, Designer and Publisher are good, but hardly comparable for pros. And what would you use instead of After Effects?

It could be a lot worse, of course. QuarkXPress users get very angry indeed. The aim of their ire? Quark's new purchase option, a subscription scheme that pretends it isn't.

The subs model is profitable now and definitely cool with the disruptor generation, but how safe will it be in the long term – and not just for Adobe? ®