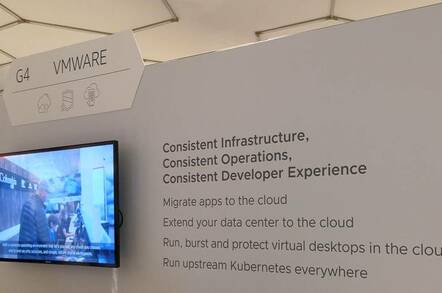 The VMware stand at AWS Transformation Day in London

Kicking off the proceedings was a session by John Enoch, VMware Technical Business Development principal, on the merits of VMware on AWS in your organisation's presumably inevitable migration to the cloud.

He had a tricky case to present. VMware on AWS is VMware hosted by AWS, running on bare-metal infrastructure. It is more expensive than using the native AWS EC2 (Elastic Compute Cloud) because you pay both AWS and VMware.

How much more? Currently, the pricing starts at £134,370.00 per year for a minimum three-host setup (each host has 36 cores and 512GB RAM), or £21.63 per hour on-demand – and that's before you add additional services, operating system licences, VPN and networking costs and more.

This is a premium service, which is no doubt why Enoch was keen to divert attention away from price and over to the less precisely defined world of "total cost of ownership".

Enoch's main point was simple: using VMware on AWS means you can tick the cloud box while still using vSphere and all the tools you're familiar with – presuming you run VMware on-premises. These same tools can manage both VMware on AWS and your remaining on-premises infrastructure. The migration will minimise the need to retrain employees and applications should run just the same way as they do now. In addition, you get ideal low-latency access to AWS services such as the Aurora database manager, Lambda serverless, or S3 storage.

"How can you take the lowest effort, lowest capability, smallest amount of change to get something done now, so that you can show some success and justify additional investment, rather than jumping straight into a cloud-native journey that you may not be ready for," he said.

Put that way, it does sound like a low-risk strategy, compared to the effort involved in re-architecting applications for the new world of microservices, containers, serverless, and everything else that comes under the "cloud native" heading.

Risk, though, is a slippery concept. There is risk in doing too little as well as doing too much. If you buy into the idea that cloud native is the right destination for most enterprise applications, then lift and shift of an existing VM-based infrastructure only makes sense as a step along the way, so the necessity of retraining and re-architecting applications cannot be escaped forever.

It is worth noting, too, that migrating from VMware to EC2 may not be such a challenge. One of the attendees here told us about the magic of AWS CloudEndure, which is able to keep an on-premises VM synchronized with an EC2 VM until the moment when you flip the production switch.

There is also the Kubernetes (K8s) juggernaut to consider. K8s is an API for infrastructure that seems likely to take over increasing amounts of workload from VMs. VMware is a smart company, and is anticipating this with the recently announced Project Pacific, K8s on vSphere, now in technical preview.

"To a developer," the technical overview reads, "Project Pacific looks like a Kubernetes cluster where they can use Kubernetes declarative syntax to manage cloud resources like virtual machines, disks and networks. To the IT admin, Project Pacific looks like vSphere – but with the new ability to manage a whole application instead of always dealing with the individual VMs that make it up."

Project Pacific offers a smooth path to K8s for on-premises VMware deployments. K8s on VMware on AWS, however, seems unlikely to be optimal, considering that AWS and all the public cloud providers have their own native, managed K8s products.

One of the use cases for VMware on AWS, presented by Enoch, was "Application hospice". This, he said, "is a place to put applications that cannot be turned off and do not justify any further investment."

There may be a lot of such applications and, though depressing, the point is valid. But the challenge for VMware is to persuade its customers that it is not just a safe choice for legacy applications and infrastructure, but will help to move them forward towards cloud native, while still somehow keeping them as customers. ®