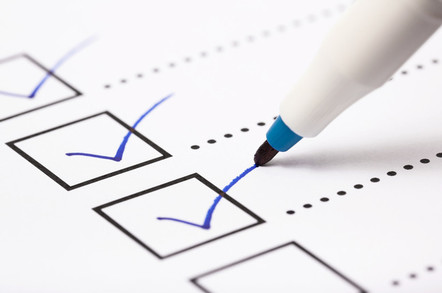 A UK Home Office consultation on new, intrusive police powers was so incompetently written that you could both "strongly agree" and "strongly disagree" at the same time when answering its questions.

The online survey, titled "Statutory guidance to police on firearms licensing", not only lacks a verification stage but also allows multiple contradictory answers to be given to the questions it poses.

The Register took a look at the consultation (homepage here, clicked the link that says "respond online" at the bottom) and found the howler.

I agree! And disagree! Strongly! Click to embiggen to a readable size

Two of the questions on the consultation were affected by the error, which remains online in unaltered form despite our pointing it out directly to the Home Office.

"One would have hoped that matters involving licensing firearms and medical records would have been done carefully and sensitively," mused Reg reader George, who tipped off Vulture Central.

Home Office consultation responses are collated by civil servants and shown to their ministers as proof of what the great unwashed actually thinks of policies dreamt up by government departments.

Given the evident level of care and attention displayed by the Home Office's Drugs and Firearms Licensing Unit here, this blunder – which has been online since July – harms public confidence in the idea that civil servants can be trusted to carry out their functions in a careful and impartial manner.

The consultation proposes, among a raft of things, allowing cops to enter private homes without obtaining a search warrant (at paragraph 4.8/page 26 of the PDF with the proposed new rules' wording) as well as allowing police workers to demand extra medical records checks to be done on their behalf by NHS GPs. The resulting bill for that police-commissioned extra work, it is proposed, will be charged to the person applying for a firearm or shotgun certificate instead of the police force that benefits from in-depth data trawls.

The Home Office has been asked to comment, though judging by their previous efforts to engage with El Reg we're not holding our collective breath.

The British Association for Shooting and Conservation (BASC) is advising its members to email civil servants direct at firearmsconsultations@homeoffice.gov.uk rather than mess around answering pre-formatted questions with sketchy responses that can be easily discarded or interpreted to suit whatever answers the Home Office wants to give to MPs.

"The Home Office proposals are neither evidence-led nor fit for purpose. The proposals will encourage police forces in England, Wales and Scotland to continue to make up their own rules," BASC said in a statement.

The National Rifle Association of the UK has been asked to comment. The consultation response deadline is tonight at 23:45 BST. ®

The Home Office eventually roused a spokesperson, who told The Register: "The question format should have only permitted one answer but this has not affected the usability of the responses.

"So far only around 1 per cent of the respondents selected more than one answer to either question and any additional responses can easily be identified and discounted if necessary.

"This minor issue is one we will resolve for future consultations."