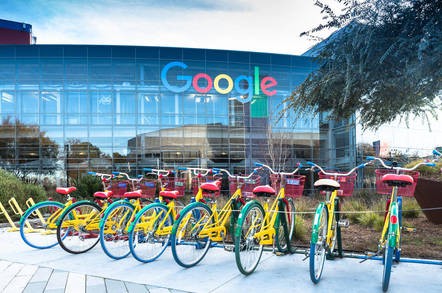 Google has been hit by another age discrimination lawsuit, just two months after the search giant settled a previous case brought by over 200 people.

In his complaint, Rodney Broome accuses Google of age discrimination, harassment based on age, retaliation, intentional infliction of emotional distress and non-payment of overtime.

Broome started work at the Chocolate Factory in July 2007 as a hardware test engineer for platform engineering – known as the Lego Labs. According to the filing, problems began when Ignacio Mendez was employed as Broome's supervisor in February 2017.

This allegedly included calling him "old and slow", calling him "grandpa", and saying he was "in retirement mode" and that he was "a worthless piece of shit". The docs also say Mendez told the plaintiff he might soon have car trouble or difficulty getting to work shortly before his car and house were broken into. Mendez boasted of his criminal connections, the filing further claims.

Mendez is accused of giving Broome impossible tasks to humiliate him and admonishing people who tried to help him complete them.

According to the filing, Broome complained to human resources, Mendez got a written warning but accused the defendant of "ratting him out" and continued to harass him, his complaint alleges. The engineer went on to allege his bonuses were cut; he was criticised for insisting staff use required safety equipment; and finally put on a personal performance improvement plan.

Broome claims his subsequent complaints were not properly investigated.

After physical confrontations and more alleged harassment Broome felt he had no choice but to resign, which he did in February 2019.

Broome is requesting general and punitive damages and a jury trial.

Back in July the ad giant paid out $11m to 227 people to settle charges it discriminated against job applicants because of their advanced years. The case covered applications for three roles: site reliability engineers, software engineers, and systems engineers.

The plaintiffs claimed they were all qualified for the jobs and were all over 40 at the time of applying. They provided 419,000 pages of documents and analysis to support their claims.

Google is not the only tech company suspected of ageism – Oracle and IBM are also facing similar accusations.

Hat-tip to Law.com for getting hold of the court filing.

The Reg has asked Google for comment and will update when we hear back. ®