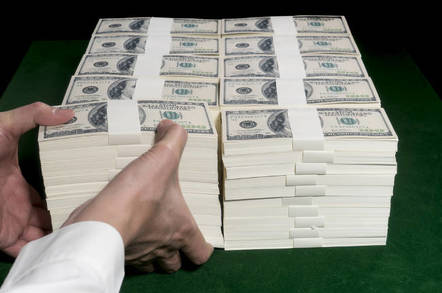 DevOps botherer GitLab has scored another $268m of funding, bringing the value of the outfit to $2.75bn ahead of a 2020 IPO.

The Series E round, led by ICONIQ Capital and Goldman Sachs, brings the total cash shovelled into the San Francisco-based company to $426m. It had already chowed down on $100m from ICONIQ back in 2018, a move that put the source shack into the billion-dollar club. That value has more than doubled since then.

CEO Sid Sijbrandij told the press at the time that he reckoned no more investment would be needed before a planned 18 November 2020 IPO. Clearly he has since found 268 million reasons to top up the coffers.

Sijbrandij told The Register today: "The strength of GitLab's business (growth) and the demand of a large market opportunity attracted investors," before going on to extol the joys of more DevOps categories under one roof. GitLab's roof, obviously.

Back in May, the company was keen to emphasise its CI/CD chops as it sought to move on from just being regarded as that thing for source management that wasn't GitHub. While customers could stick with their existing CI/CD tooling, the GitLab gang were hoping users would drop the likes of Jenkins and Jira in favour of their tooling.

The team also told us that the next goal was to move into security and dynamic code analysis. Today's investment will see some of that $268m spent on adding features in areas such as monitoring, planning and, yes, security.

However, while $2.75bn is not to be sniffed at, the company remains some way behind the $7.5bn spanked on GitHub by Microsoft. And GitHub, with its 40 million users and over 100 million repositories, is adding CI/CD for GitHub actions.

To widen its audience, GitLab has also dropped its Enterprise (Core) product on VMware Cloud Marketplace, with packaging and support taken care of by Bitnami. The move means that users who prefer to run things on their own infrastructure can swiftly deploy the source code and CI/CD toolset on VMware.

We do, however, note that at time of writing, the product was described in the VMware Cloud Marketplace as GtiLab. We too are prone to the odd typo here at Vulture Central and are relieved that no one accidentally typed "GitHub".

Let he who is without sni cast the first stone