'This is the last Fitbit I will buy' 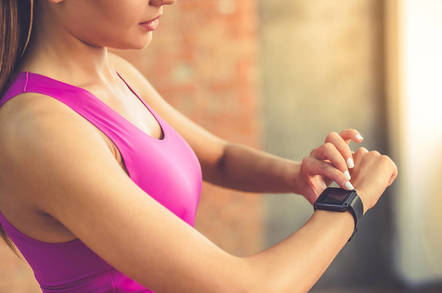 Yesterday El Reg wrote about the frustrating syncing failures plaguing FitBit gadgets over the past four or so weeks.

Unlucky punters say that, since a mid-August Android app and firmware update was released, they have been unable to get their wearable fitness trackers to link up consistently with their handsets over the air, and Fitbit has been of no help. This, it seems, is not just a problem affecting a handful of people, as within hours of the article going up, scores of Reg readers wrote in to share with us the problems they have been experiencing with the gizmos. Here's a selection...

Fitbit owner Olga Baker wrote in to tell us:

I have the Fitbit blaze and recently started having sync issues as well as my heart rate not reading to my Fitbit.

Now when I charge it at 100 per cent it won't last me more than maybe 3hours. I have only had my Fitbit for two and a half years. For paying $300 for this Fitbit, you would imagine the battery to live longer.

Arnold Maika is just about done with Fitbit completely:

I thought the problem started with something I had done with my settings. This is the last Fitbit I will buy.

I have a Blaze that is only one month old and I need to charge it every single day. This is a new replacement for one that would not stop flickering. It was the second Blaze that I had this problem with.

Here is an update from reader Anthony White:

I am having the same issues with my Charge 2 device. Every since the update my device has not worked properly. I've tried the reset and unpairing method, yet still nothing.

I'd appreciate a solution or some sort of consideration for this long standing issue. The functions that I purchased the device for is useless at this point.

Fergus Ducharme started having problems after heading off abroad:

Just returned to Philippines from home in Canada. Since arriving, nothing has worked as it's supposed to. No syncing, no changing dates and times etc. Watch itself is losing time, and it is less than a year old, it is obviously a software/upgrade problem.

This one comes from Nadia Wheeler, who has been having issues with multiple devices:

The company offers no solutions and states it my Samsung S10e that is not compatible. The old phone sometimes works and sometimes doesn't. Two phones, three Fitbits, and still not working properly.

One of the more unhappy customers is Susan Boronczyk:

I have had so many problems with my Fitbit Versa since the update. It won't sync at all. Now my Fitbit app can't find my device. It won't download the Versa so I'm not getting any information on my Fitbit. It always messes up my sleep, saying I'm sleeping when I'm awake looking at my Fitbit. It adds steps while I'm sleeping. Of course now it doesn't do anything.

I've contacted Fitbit about 25 times and they don't answer me. I've contacted the Better Business Bureau about them and their terrible service. Before they got on Twitter they used to answer right away and always be able to fix the problem. Now they don't answer. Now they're telling me it's my phone that is messing up the Fitbit. My phone was fine with the Ionic and when I first got the Versa. Now its all a piece if crap and Fitbut won't stand behind their product.

Likewise, Diane Zamberlan is at her wit's end with the buggy wearable:

My Fitbit is a piece of junk since the update. Not holding a charge, not syncing, not registering accurately or in a timely fashion, the list goes on.

Please do something. Thank you.

I'm in the States but what worked for me was downgrading the Fitbit app back to version 2.75.

I had to downgrade it via the Apptide app instead of Google Play store. They have all the old versions prior to the new update. Make sure you turn off auto update.

Sadly, among the deluge of mail was not a response from Fitbit. The gadget slinger doesn't seem to have any response for either the press or its customers on what is going on and how it can be fixed.

Whether this is because Fitbit doesn't know how to fix the issue, or just doesn't really care, is not for us to say. One suggested fix, proposed by some, is to factory reset your Fitbit and then uninstall and reinstall the official Android app, however that doesn't work for everyone. Your mileage may vary.

The Register will, of course, provide an update should we hear anything from the vendor. ®