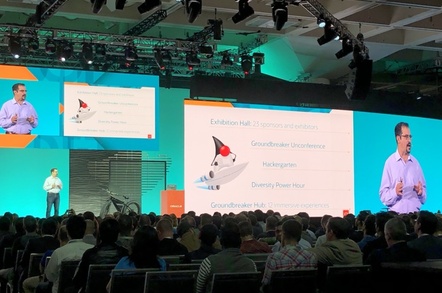 Code One Oracle on Monday announced the release of Java SE 13 (JDK 13), saying it shows the tech titan's continued commitment to make innovation happen faster by sticking to a predictable six-month release cycle.

No evidence was provided to demonstrate that enterprise innovation is actually accelerating as a consequence of biannual platform revisions. Oracle at least deserves credit for its commitment to consistency.

Word of JDK 13 arrived on Monday as Oracle's co-located OpenWorld and Code One conferences got underway in San Francisco. The Code One keynote, preceded as in previous years with a disclaimer that investors shouldn't rely on anything said at the show, opened with an overview of quantum computing by Jessica Pointing, a doctoral student in quantum computing at Stanford University.

What does quantum computing have to do with Java? Well, Pointing said developers can write code for the Strange Quantum Computer Simulator in Java.

The challenge for quantum computing right now, she explained, is to demonstrate that a quantum computer can outperform a classical computer to solve specific types of problems. Surprisingly, despite quite a bit of investment, that hasn't happened yet. It could happen in the next few months. Or it might take a few years. Or decades.

Looking back a few years to 2017, Georges Saab, veep of software development for the Java platform, recalled the decision to change the Java release cadence, noting that large releases every few years displayed downsides as the world embraced more rapid change.

"Three of these releases have been delivered since then and the fourth is imminent," said Saab. "We're proud to announce Java 13 with general availability starting tomorrow."

Binaries for JDK 13 are expected to be available for download on Tuesday, September 17.

Saab proceeded to interview various developers who use Java at various companies to reveal that they're happy with the faster release cycle. Unsurprisingly, no naysayers showed up.

Java, insists Oracle, is the world's most popular programming language; IT consultancy RedMonk ranks Java at number two, behind JavaScript. But such measurements say more about statistical methodology and data sources than verifiable popularity. Suffice to say that Java is widely used among companies large and small, and it remains an employable competency.

Notable preview features in the release include switch expressions (JEP 354), which extends the switch statement so it can be used either as a statement or as an expression, and text blocks, which provides a concise way to represent multi-line text strings without escape characters (JEP 355).

"It's not a particularly sophisticated feature but it makes a big difference," said Brian Goetz, Java release architect.

Preview features may be changed or removed, and are provided to solicit community feedback.

Goetz acknowledged that there aren't a lot of big features because those are now being broken up into smaller ones to accommodate more frequent updates. "There's just as much innovation, going on, perhaps more, but it will be broken up over a series of smaller releases," he said. ®