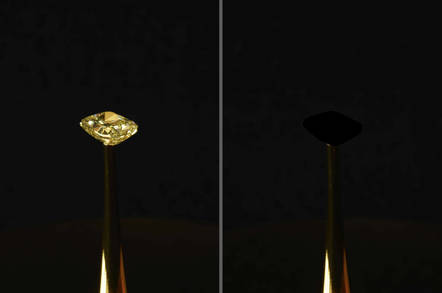 Compare ... A diamond, left, and, right, coated with pitch-black nanotubes
(Image credit: R. Capanna, A. Berlato, and A. Pinato)

Carbon nanotubes have peculiar properties. Not only do they have the highest strength-to-weight ratio of any known substance they can also absorb the most light, making them the blackest material yet.

A pair of academics at MIT in the US discovered this when they decided to grow tiny carbon nanofibres on a slice of aluminium washed in a briny solution. When they measured the optical absorption, they found that the material sucked in a whopping 99.995 per cent of light.

“Our material is 10 times blacker than anything that’s ever been reported, but I think the blackest black is a constantly moving target,” said Brian Wardle, a professor of aeronautics and astronautics at MIT, earlier this week. “Someone will find a blacker material, and eventually we’ll understand all the underlying mechanisms, and will be able to properly engineer the ultimate black.”

The level of blackness is the same when it’s viewed at different angles too. At the moment, the strange substance is displayed at the New York Stock Exchange as part of an art exhibit. A 16.78-carat yellow diamond worth $2 million has been covered in the carbon nanotubes. Since the soot-like material gives off so little light, the ridges and reflective faces of the diamond can’t be seen so the gem looks like a flat outline.

There are other possible practical applications for this material too. The researchers reckon it’ll be useful in optical blinders or telescopes. “There are optical and space science applications for very black materials, and of course, artists have been interested in black, going back well before the Renaissance,” said Wardle.

Wardle and his colleague Kehang Cui, a former postdoc researcher at MIT, who is now professor at Shanghai Jiao Tong University, weren’t trying to make the blackest material in their experiments. Instead, they wanted to find new ways to stick carbon nanotubes on highly conductive materials like aluminium to magnify its electrical conductance.

The top layer of the metal tends to oxidise when it’s exposed to air, making it more of an insulator than a conductor. To prevent this, the researchers dipped the aluminium in sodium chloride solution. The chloride ions dissolved the oxide layer, making the aluminium more conductive again.

Can it be true? That I hold here, in my mortal hand, a nugget of PUREST ... BLACK?

Next, the foil was put in an oxygen-free environment and baked in the oven at 400 degrees Celsius with the carbon nanotubes and a catalyst; carbon deposits formed on the aluminium foil by a process called chemical vapor deposition. The details have been published in the ACS Applied Materials & Interfaces journal.

“I remember noticing how black it was before growing carbon nanotubes on it, and then after growth, it looked even darker,” said Cui. “So I thought I should measure the optical reflectance of the sample.

The researchers aren’t sure why it absorbs so much light. It’s probably down to the material itself and its structure. The carbon filaments, measuring about 26 nanometers, are stacked alongside one another like trees in a forest. Perhaps, the arrangement traps incoming light and transforms it to heat.

“CNT forests of different varieties are known to be extremely black, but there is a lack of mechanistic understanding as to why this material is the blackest. That needs further study,” said Wardle. ®

This article was revised after publication to clarify this material absorbs 99.995 per cent of incoming light, not 99.96 per cent as MIT stated initially.