700km on a single charge: Mercedes says it's in it for the long run 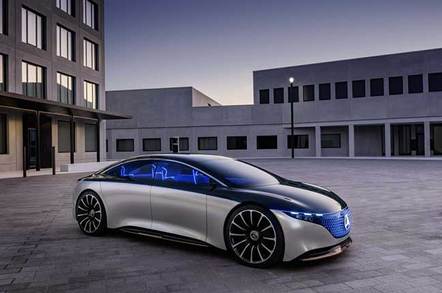 In the same week that the motoring industry discovered the Tesla Model 3 was the UK's third most popular car purchase, Mercedes-Benz unveiled an electric supercar at the Frankfurt Motor Show with high expectations, and probably no little relief.

The Vision EQS looks every bit the luxury sedan and features a startling headlight system, but the quiet boast of the day was the car's range. Lab tests using the new Worldwide Harmonised Light Vehicle Test Procedure (WLTP) indicate that the Vision EQS can squeeze 700km from a single full battery charge.

This puts it far ahead of the nearest comparable luxury EVs and goes a long way to calming the nervous, well-heeled motorist who wants to drive for pleasure rather than just shopping trips. Tesla's long-range Model S and X, for example, are rated at 595km, and the Vision EQS would be able to park 250km further up the road than Porche's 2020 Taycan before hunting for a recharge point.

Mercedes-Benz attributed this to electric motors at both axles as well as the 100 or so kilowatt hours of battery storage fitted under the floor. Its 350kW charging system is claimed to be able to ultra-fast to charge the vehicle to 80 per cent capacity within 20 minutes.

Also claimed is a combination of 350kW output and 759 Newton-metres of torque to give acceleration from 0 to 60mph in under 4.5 seconds.

So far, so Top Gear. What makes the Vision EQS so striking visually is its external black-panel LED matrix digital lighting system that sweeps all the way around the car: the Lightbelt. This enables arguably charming/vulgar effects such as the floating stars at the rear, but the business end is definitely at the front.

Combined with a modular sensor system of radars and cameras (Mercedes says the Vision EQS is Level 3 semi-autonomous), the holographic lenses on the light system enables pinpoint accuracy of every beam.

An obvious application is to mask parts of a full beam to protect other drivers from unnecessary glare. However, it can also be used to project graphics onto the road surface ahead, so instead of following GPS directions on the satnav screen while driving in the dark, a driver could project the arrows and so on in front of the car and keep their eyes on the road.

The Vision EQS is still a concept vehicle but looks a great deal more than a prototype. Besides, Mercedes-Benz has publicly committed itself to going completely carbon-neutral over the next 20 years, so it seems to be sold on EVs as its future.

We can but hope the production versions don't overprice themselves into the furnace of good intentions. ®