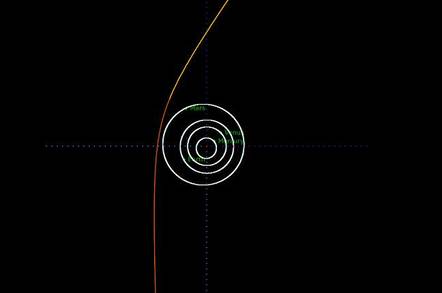 ESA scientists are studying an object that has all the hallmarks of being another entity from outside our Solar System, making it the second to be spotted after 2017's cigar-shaped interstellar comet.

The observation has, thus far, been a team effort. Gennady Borisov of the Crimean Astrophysical Observatory spotted the thing first, on 30 August. The ESA's Marco Micheli then snapped additional images a week later and checked the position of the object, named C/2019 Q4, using the Canada-France-Hawaii Telescope in Hawaii.

NASA's Center for Near Earth Objects' Scout, a hazard assessment system for newly discovered objects, noted the unusual orbit of C/2019 Q4, which pointed to it passing through our Solar System.

The key is in the orbit data. A body in a near-perfect orbit about its star has an eccentricity – how much the orbit is stretched – of nearasdammit zero. Something like a comet, with an elongated orbit around a star, will have an eccentricity of between one and zero.

Greater than one, and things are reckoned to be interstellar.

C/2019 Q4 has, by current readings, a highly elongated orbit with an eccentricity of about three. Such a "hyperbolic" orbit qualifies as interstellar. Assuming, of course, the data is correct.

The readings were taken when the object was close to the horizon and near to the Sun in the sky, which isn't ideal. Micheli said: "We need to wait a few days to really pin down its origin with observations that will either prove the current thesis that it is interstellar, or perhaps drastically change our understanding."

Either is a tantalising prospect.

At present, scientists reckon C/2019 Q4 is an active comet and a few kilometres in diameter. Doomsday forecasters will be disappointed to learn that it won't be troubling the Earth, but will come within 300 million km of the Sun in early December.

ESA emitted a slightly rueful tweet, pointing out that had the object dawdled a bit on its way to our Solar System and arrived a few years later, the agency's upcoming Comet Interceptor mission could have paid it a visit.

Had comet C/2019 Q4 entered our Solar System a few years later, it could have been a potential candidate for ESA’s ‘Comet Interceptor’ mission (although the primary target is a comet in the Oort cloud)
Find out more here: https://t.co/EJjPy9vULT pic.twitter.com/jav3IVv0pv

Selected in June this year, the Comet Interceptor mission is tentatively scheduled for launch in 2028. Its goal is to encounter a pristine comet rather than a short-period comet that will have been repeatedly blasted by the Sun.

Something like C/2019 Q4 would fit the bill nicely, since there is every chance it has its origins outside our Solar System.

Boffins won't be left too downhearted, however. If confirmed as interstellar, a second visitor in two years indicates that, with continuing improvements in survey telescopes, mission planners won't have to wait too long for another candidate. ®