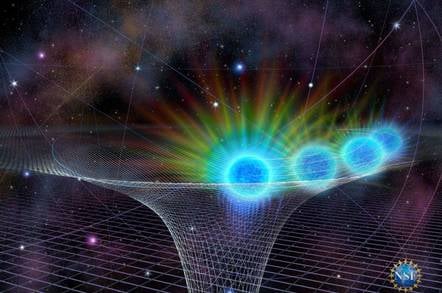 Video The behemoth black hole lurking at the heart of our Milky Way galaxy is hungrier than it's ever been, and is currently feasting on the largest meal that has ever been observed in almost a quarter of a century.

A team of scientists led by the University of California, Los Angeles (UCLA), analysed over 13,000 measurements taken from the Very Large Telescope and Keck Telescopes in Chile and Hawaii respectively. Over 130 days, they studied the brightness emanating from the center of the Milky Way, caused in part by energy released when the black hole feeds off gas and dust.

The team discovered that “unprecedented” levels of near-infrared wavelengths and strange fluctuations that deviate from normal behaviour, according to a paper published in The Astrophysical Journal Letters. The brightest flux levels observed this year are twice as energetic as what has ever been observed by both observatories.

“We have never seen anything like this in the 24 years we have studied the supermassive black hole,” said Andrea Ghez, co-author of the study and a professor of physics and astronomy at UCLA. “It’s usually a pretty quiet, wimpy black hole on a diet. We don’t know what is driving this big feast.”

You can watch a video of some of the images taken from the telescopes that show it flickering in and out of brightness below.

Known as Sagittarius A*, the monstrous void is estimated to be over 4 million times as massive as the Sun. https://arxiv.org/pdf/0810.4674.pdf It’s possible that its appetite is steadily increasing, or maybe it's just devoured an unusually large snack.

“The big question is whether the black hole is entering a new phase — for example if the 'spigot' has been turned up and the rate of gas falling down the black hole ‘drain’ has increased for an extended period — or whether we have just seen the fireworks from a few unusual blobs of gas falling in,” said Mark Morris, who is also a co-author of the paper and a UCLA professor of physics and astronomy.

The team will keep monitoring Sagittarius A* across various wavelengths to see whether it’s still wolfing matter down. “We want to know how black holes grow and affect the evolution of galaxies and the universe. We want to know why the supermassive hole gets brighter and how it gets brighter,” Ghez concluded. ®