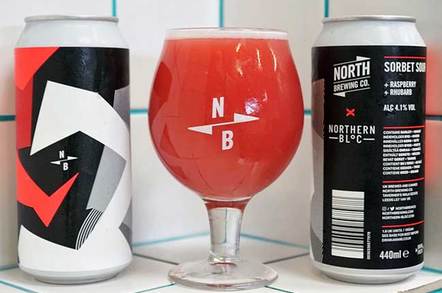 Beer o'clock starts at 4pm today at Leeds-based North Brewing Co's tap room where it will be launching a sour beer that "pushes the boundaries of taste, flavour and colour".

Forget your hoity-toity cloudy lemon ales from Holland; this one's a manly bright pink and made in Yorkshire.

The Vegan Sorbet Sour is brewed with organic raspberry puree and forced Yorkshire rhubarb supplied by locally famed fruit and veg producers E Olroyd & Sons within the notorious "Rhubarb Triangle". It is the result of an arguably unholy alliance between North Brewing Co and another Leeds-based hipster company, Northern Bloc, which describes itself as "ice cream alchemists".

The brewer said it had previously enjoyed quite a bit of success with its thick Triple Fruited Gose beers, which it introduced in March last year. As the name suggests, this contains three times the amount of fruit you might find in other fruited sour beers. Tasters refer to the mouthfeel as akin to that of a smoothie.

This year, the company began looking for lactose-free alternatives for thickening their fruited sour beers and hit on the idea of approaching Northern Bloc, a specialist in making vegan ice cream and sorbet. The Vegan Sorbet Sour is essentially based on Northern Bloc's rhubarb and raspberry ice cream.

Don't argue about the name.

After today's launch at North Brewing's in-house Brewery Tap venue, the new bright pink smoothie beer will go on general release from Monday, available on tap and in 440ml cans. It's an easy-drinking 4.8 per cent and here at Reg Towers we wonder if it counts as one of your five-a-day.

Health drink or not, we rely upon readers to tell us what colour it turns your, er, you know. ®

'Doubly unacceptable' Swiss vegan forces his way into the army

Tax or warfare? Right, where do I collect my rifle...