And the teeny-tiny bottle of AI whisky goes to... 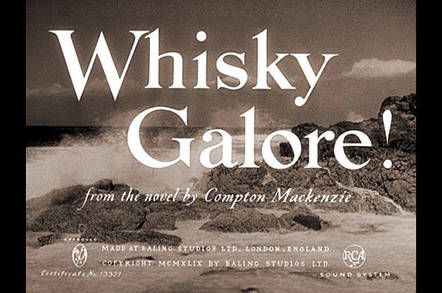 The Vultures asked, and the always creative Register readership answered. Now we have a name for Microsoft and Mackmyra's new AI-designed whisky blend.

Last week we paid a visit to Mackmyra's Swedish whisky distillery and their fragrant storage facility for casks deep underground, and learned how the gang had used some Python running on Azure to come up with a bunch of new recipes.

Your correspondant even tried a drop or two, and noted the seemingly innocent typo in one of the presentations that mixed "whisky" with "whiskey".

The name of the blend, "Intelligens", seemed a little dull to us so, in return for the 50ml sample we were given by the Swedish barrel boffins, we asked for alternatives and were not disappointed.

An early contender for the prize was Rabster's Glen Turing, which appealed on multiple levels. Then GameOver's D-RAM almost had it in the bag, and was championed with gusto by one of our tame vultures.

Naturally, someone had to suggest Whisky McWhiskyFace. Jason Bloomberg even admitted that he was "appalled I'm the one having to say it." We were too, Jason. We were too.

While it generated the requisite laughter for inclusion on the shortlist, it had to be disqualified because, well, it's an old trope and El Reg has only the freshest puns.

An Anonymous Coward suggested Buzzword Bingo Batch, which, while one of the personal favourites of this reporter, also failed to make the grade.

And the least said about Why Not?'s MVP (Most Valuable Pisshead), Roq D. Kasba's Vulture Piss and Anonymal coward's Gampiss, the better. There was more than a little immature giggling to be heard in the office.

It is actually quite a flavoursome tipple - there is no urine involved in the production process. So entries that employed the word "wee" were also excised. Although, disappointingly for some, it is certainly a wee bottle.

Wooosh's Algohol and Graham Cunningham's Big Iron Bru also had strong support in the office, but were dismissed by the almighty Ed. The latter excision demonstrated that pedantry is alive and kicking in the Reg editorial office: "But it comes from Sweden, not Scotland..."

In the end, the prize goes to BBBerstler's HALcohol, a reference to a famous artificial intelligence of cinema (in this case one that will try to murder your liver).

We did, of course, ask if the winning name might find its way onto a bottle or two. The answer "I'm sorry, Dave, I'm afraid I can't do that" should have been obvious. ®