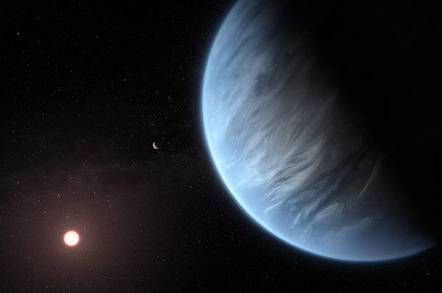 Scientists have detected water vapor wafting from the atmosphere of an exoplanet orbiting around its star within the habitable zone for the first time, according to a paper published in Nature Astronomy.

Classified as a super-Earth, a type of planet that’s less than ten times the mass of our home world, K2-18b encircles its parent red dwarf star, just 111 light years away from here. It’s eight times as massive as Earth and has a temperature somewhere between 200 K to 320 K (-73.15 to 46.85 degrees Celsius). This all means you shouldn't assume it has life as we know it: there's just the potential for it.

“Finding water on a potentially habitable world other than Earth is incredibly exciting,” said Angelos Tsiaras, a research associate working at University College London’s (UCL) department of physics and astronomy. “K2-18b is not ‘Earth 2.0’ as it is significantly heavier and has a different atmospheric composition. However, it brings us closer to answering the fundamental question: Is the Earth unique?”

Water, which covers over 70 per cent of our planet, is considered essential for our kind of life. Its liquid form provides the perfect medium that allows organic compounds to mix and react with one another to form complex organisms.

There are other ingredients that are necessary, of course, though there are promising signs K2-18b may harbor more than just water vapor. Data collected by the Hubble Space Telescope in 2016 and 2017 reveals there is also hydrogen and helium. The researchers from UCL also believe that there may be nitrogen and methane, too.

Sunlight from its parent star, K2-18, shining through its atmosphere was captured by the telescope’s Wide Field Camera. Compounds absorb light at various wavelengths depending on their chemical makeup ans by studying the star’s spectrum with algorithms scientists can analyse what’s in the planet’s atmosphere.

“Our discovery makes K2-18b one of the most interesting targets for future study. Over 4,000 exoplanets have been detected but we don’t know much about their composition and nature. By observing a large sample of planets, we hope to reveal secrets about their chemistry, formation and evolution,” said Giovanna Tinetti, coauthor of the paper and a physics and astronomy professor at UCL.

Ingo Waldmann, who is also a coauthor of the study and a physics lecturer at UCL, believes that there will be many other super-Earth exoplanets lying in habitable zones - that may contain water - waiting to be discovered in the future.

“With so many new super-Earths expected to be found over the next couple of decades, it is likely that this is the first discovery of many potentially habitable planets. This is not only because super-Earths like K2-18b are the most common planets in our Milky Way, but also because red dwarfs — stars smaller than our Sun — are the most common stars,” he said.

The planet was first discovered in 2015 by NASA's now-defunct Kepler probe.®