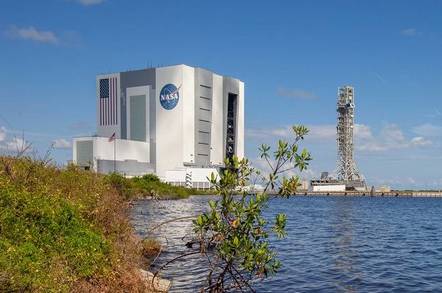 Mobile Launcher Platform trundles back to 39B (pic: NASA/Ben Smegelsky)

NASA's enormous mobile launcher is back at Pad 39B after worried engineers stashed it in the cavernous Vehicle Assembly Building (VAB) to ride out Hurricane Dorian.

Engineers had been testing the platform on the pad ahead of an eventual mission and verifying everything works except for, you know, actually standing the rocket on it.

The 380-foot structure was wheeled back to the VAB at Florida's Kennedy Space Center atop an Apollo-era crawler transporter on 30 August. As it happened, the storm ended up passing 112km (70 miles) east of the facility, but better safe than sorry. Yesterday, NASA moved the platform back to Launch Pad 39B to complete testing.

The launcher itself consists of a two-story base on which the SLS rocket will sit. A 12.2m square tower rises 355 feet (108 metres) from the base and contains all the umbilicals and connections required to keep the monster rocket fed and in communication with mission controllers during launch preparation. It also features a walkway for access to the Orion crew module.

Weighing in at 4,760 tonnes (10.5 million pounds) by itself, the platform will eventually have the SLS rocket stacked on it during a sojourn in High Bay 3 of the VAB. The Orion spacecraft will be popped on top ahead of a slow trek of just over four miles to Pad 39B.

SpaceX, of course, has laid claim to the other Apollo and Shuttle-era pad, 39A, for its Falcon antics. Pad 39A will also host SpaceX's first crewed mission to the ISS.

39B has a bit longer to wait. That first SLS mission has continued to slide, despite not-so-thinly-veiled threats from the US Administration that something a little more commercial might end up being selected.

Last week, engineers prepared to join the engine section of the core stage of the SLS to the rest of the hardware. Once fitted, the four former Space Shuttle Main Engines will be capable of generating 2 million pounds of thrust before eventually being dumped in the ocean. Or course, there is still that pesky green run to get through at the Stennis Space Center B-2 test stand before Artemis 1 will trouble the mobile launcher.

While NASA's sites continue to bravely insist that 2020 is still on the cards, 2021 is looking much more likely for the first SLS launch, according to observers. That, in turn, makes the goal of putting boots back on the lunar surface by 2024 seem even less plausible.

All is well with #SpaceX’s Starship prototype after Hurricane #Dorian skirted by the Space Coast. No damage in the area. pic.twitter.com/RTHjtlFaXX

SpaceX's Starship prototype was also hidden away ahead of the storm, and also sustained no damage. Despite NASA's progress with its own launch platform, there is every possibility that SpaceX's own megarocket could pip the SLS to orbit in the coming years. ®