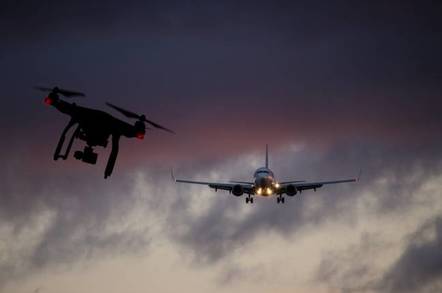 Five people have been arrested by the Metropolitan Police for threatening to fly drones around London’s Heathrow airport this Friday to protest climate change.

The group announced at the end of August that they were planning to disrupt the airport – one of the world’s busiest – this coming Friday and would meet with the police and airport authorities to discuss their plan. On Tuesday, they reiterated that plan, stating that they were prepared to go to jail to carry out the action.

Predictably enough, the police arrested them. “Earlier today (Thursday, 12 September), three men and two women aged between their 20’s and 50’s were arrested on suspicion of conspiracy to commit a public nuisance in relation to operations at Heathrow Airport on Friday, 13 September,” reads the Met’s official statement.

The group, which calls itself Heathrow Pause, claims not be interested in self-promotion but its members have gone to some lengths to appear on TV, actively and repeatedly contacting journalists and posting their subsequent appearances on its webpage.

The group also appears to believe that its approach of telling the police when it intends to carry out an illegal act, and offering to meet with police to discuss the illegal act, should prevent the police from arresting them before they did so.

Seemingly unaware that the police’s job is to prevent illegal activity rather than provide PR to attention-seeking buffoons, the group said it was “disappointed” that the authorities hadn’t warned the public that Heathrow was likely to be shut down because of their action. They had even given six weeks’ fair warning and picked a date that they felt would cause least disruption, they complained.

“We gave the Heathrow Authorities six weeks’ notice of our intentions, with full details on our plans, the safety of the Action, our desire for an open dialogue with the Police, and all the precautions we’ve put in place. The response was, to say the least, disappointing," he said.

"To our knowledge Heathrow has done nothing to warn passengers or airlines yet, or put in place any contingency plans, even though we strongly recommend it. Furthermore, we deliberately chose a date after the summer holidays, to minimize the disruption to families and holidaymakers.”

“We’re not the ones who will be cancelling flights or grounding aircraft. Our Action is designed to be completely safe,” they stated with a monumental lack of self-awareness. “If any planes are grounded, it will be Heathrow Airport’s decision, probably thanks to pressure from their insurers.”

Aside from highlighting in an almost satirical fashion the dangerous limits to individualism, the group hopes its stupendously stupid actions and arguments will bring an end to climate change.

One of them quoted herself in a press release as saying: “I feel at the end of knowing what else to do. We know the science, we know what’s already happening to communities around the world. Unprecedented extreme weather is ripping through regions and destroying lives. The breakdown of our environment spells disaster for billions. I can’t with good conscience not act. I don’t want to get arrested, but it feels like it’s the last resort for our Government to take notice. I’m a grandmother and I care deeply about…”

I think we’ll stop it there.

Another one of the idiots had this to say about himself in a press release: “I’m mainly doing it because I’m trying to be a human being. And I’m 53. In a few decades I’m not going to be here anymore. Maybe in a few years. And when I die, I want to know I haven’t lived a lie. And for me, I cannot pretend I don’t know what needs to happen.”

The issue of drones in the airspace around airports is a serious problem: at the end of last year, Gatwick was closed for more than a day after drones unexpectedly appeared. Two weeks later, the same thing happened again. That followed on from what authorities suspect was a drone collision between it and an A320 landing at Heathrow back in April 2016 and further drone-related chaos the following year.

Of course, climate change and politicians’ failure to act in a sufficient fashion to limit it is a serious issue; one that can and should be tackled in a multitude of different ways and which will require the general public to provide the impetus.

Spouting idiotic nonsense and promising to disrupt the lives of thousands of people just to get yourself on the telly is not one of those ways. ®