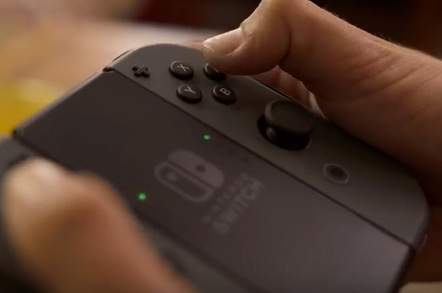 Sky, BT, EE, Talktalk and Virgin Media have been ordered to "block, or at least impede access" to four sites that help distribute pirated Switch games, or facilitate copyright infringement.

Two of the websites were operated by the parties responsible for developing circumvention devices for the Switch, while the others are run by UK resellers of such devices.

The Japanese console maker protects the games using an encrypted unique key. As well as encryption of the game software, encryption is used to create a digital signature that ensures that the source of the software being supplied is authorised. The operation of the technological protection measures [TPMs] relies on the presence of various encryption keys in the firmware in the Nintendo Switch.

However, the court noted: "Regrettably, third parties discovered that there was a way to circumvent the TPMs by installing custom firmware on the Nintendo Switch."

Nintendo had implemented a change to the Switch to prevent this in June 2018, "but there remains a very substantial number of the earlier, vulnerable Nintendo Switch consoles in circulation and there is evidence of active attempts being made to circumvent the TPMs even on the post-June 2018 Nintendo Switches," the High Court judgement stated.

Mr Justice Arnold ruled that the injunction sought "is necessary to prevent, or at least reduce, substantial damage" to Nintendo.

Substantial quantities of pirated games have been downloaded in the UK, he added, and installed on Nintendo Switches using the circumvention devices, resulting in "significant losses as a result."

Arnold said no alternative measures were realistically available, as Nintendo has been unable to identity the operators of the websites.

Under Section 97A of the Copyright, Designs and Patents Act, ISPs can be forced via a court order to block websites found to heavily facilitate internet copyright infringement.

Britain's video games industry body, UKIE, said in a statement: "These circumvention devices, which enable the use of unauthorised copies of videogames, jeopardise the businesses of those who uphold and rely upon the sales of legitimate products.

"As such UKIE fully supports the ruling and wishes to reiterate the strong stance of the UK videogames industry against illegitimate operators.

"The case represents one of multiple industry endeavours to prevent bad actors from infringing upon and exploiting the intellectual property rights associated with games."

The Register has asked Nintendo and the ISPs for comment. ®

Now you can shave a few milliseconds from real-time apps and, er, batch processing