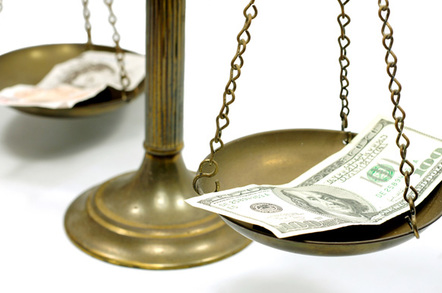 Autonomy Trial A top Deloitte auditor "never said anything" at meetings of Autonomy's internal audit committee, its chairman – a one-time CEO of the Prudential insurance group – has testified to London's High Court.

Giving evidence during the long-running Autonomy trial earlier this week, Jonathan Bloomer told the court that Deloitte auditor Lee Welham "never said anything at the meetings so he left no impression on me".

HPE is now suing Lynch and Autonomy financial chief Sushovan Hussain at the High Court in London, seeking $5bn in damages. Over in the States, prosecutors are pursuing a separate criminal fraud case against Lynch and Autonomy bean-counter Stephen Chamberlain. All three men deny any wrongdoing. You can read more of our previous coverage here.

Bloomer, who currently heads Morgan Stanley International, chaired Autonomy's audit committee between September 2010, having joined it in the previous month. He was in charge for four of its quarterly meetings before Autonomy's buyout by HPE in 2011.

Aside from the external committee members, it was also attended by Autonomy CFO (and Lynch's co-defendant) Sushovan Hussain, former Autonomy chief operating officer man Andy Kanter (its secretary), finance veep Steve Chamberlain (who was charged with fraud in the US along with Lynch) and two others.

The picture that emerged of how the Autonomy audit committee worked, under Goodall's cross-examination of Bloomer, was instructive. It met quarterly in the days before end-of-quarter financial results for Autonomy were published. Its meetings lasted "closer to two hours than an hour" and Bloomer confirmed that it would have been "very unusual for an audit committee" to look at "underlying documentation" behind Autonomy and Deloitte's presentations of financial issues.

Nonetheless, during re-examination at the end of his evidence, Bloomer confirmed that he "went through a draft of [Deloitte's] report in quite some detail" with its author, Deloitte partner Nigel Mercer, prior to each audit committee meeting.

Last week former Filetek gros fromage Gary Szukalski testified that his company, a software firm, had been involved in a $10m reseller deal on behalf of Autonomy with the US Department of Veterans' Affairs (USDVA). Filetek carried the commercial risk for the software licence while Autonomy negotiated directly with the USDVA, the end customer.

"You would not have understood that Filetek was going to make no attempt to achieve a sale to the Department of Veteran Affairs?" asked Goodall.

Bloomer replied: "Some of these, there was, at the time, from my recollection, clearly an understanding that Autonomy also retained a relationship with some of the end users. I can't recall whether that was true of the Department of Veteran Affairs, but I would have expected Filetek to be selling to the department."

This was not what Szukalski testified last week. He referred to Filetek as merely "holding the paperwork" for the deal on behalf of Autonomy, which was doing the heavy lifting.

Back in the courtroom, Goodall followed up with Bloomer: "If Filetek had been given to believe that it would not be left out of pocket if an end user deal failed to eventuate, that would have been relevant for you to know at the time, yes?"

"If that had been the case, I would have wanted to understand the background to that," agreed Bloomer. He added that Deloitte "confirmed with all of the reseller deals when they did their confirmations that there were no side letters" allowing for sham deals to be set up.

You'd have intervened, wouldn't you?

Questioning the former Autonomy audit committee chairman on other deals said by HPE to be proof of fraudulent accounting at the company, Goodall asked Bloomer: "If management had deliberately caused the audit committee and Deloitte to proceed on the basis of an incorrect understanding, that would have given rise to a concern about management integrity, yes?"

"If it – yes, if it had been deliberate," replied Bloomer, stuttering that "in most of these areas, the cause is a mistake, not normally deliberately trying to mislead an audit committee."

Bloomer added: "So from a Deloitte point of view, and clearly from the previous audit committee's point of view, hardware was not seen as a big topic actually to flag," while agreeing with Goodall that if he had been told it was flagged up in Autonomy's public financial reports but in fact it hadn't, he would have "wanted to know why".

The former audit committee chairman also told the court that, contrary to what HPE alleges, the amount of Autonomy hardware sales accounted for under "sales and marketing" expenses was "tiny". He elaborated: "I think it was about three or four million in the quarters in 2010; it was a couple of million in the two quarters in 2011, in a number that was about 120 million of cost of sales and 200 million of sales and marketing per quarter. I mean, it was just immaterial..."

Re-examining Bloomer, Mike Lynch's barrister Robert Miles QC asked whether he thought there was any ban on Autonomy negotiating direct with end-user customers, even where a reseller was supposedly getting a deal through.

"No, not at all," replied Bloomer, who said the same thing when Miles asked if there was any requirement that the VAR [reseller] itself must conduct negotiations with the end user?"