Still, Chipzilla's almost everywhere when it comes to Microsoft devices 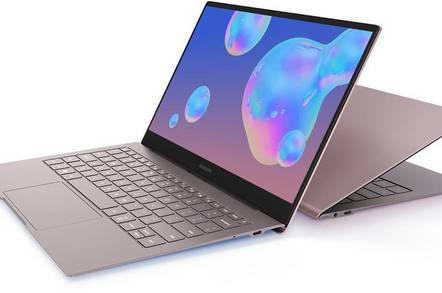 IFA 2019 Is Windows on Arm a thing? Yes, both Samsung and Lenovo had models on display at IFA in Berlin. But it has yet to take off with the great majority of laptops running Intel or AMD chipsets.

At IFA, there were few Windows-on-Arm devices on display, though last month Samsung was showing the Galaxy Book S, running Windows 10 running on Qualcomm's Snapdragon 8CX platform. It features 8GB RAM, up to 512GB internal storage, built in LTE mobile connectivity, a fingerprint reader, and a 13.3" 1,920 x 1,080 10-point multi-touchscreen. Its best features are its light weight (just under 1kg) and long battery life (up to 23 hours). Price is about €999, which seems on the high side for the specification – though no doubt deals will be available.

Qualcomm's 7nm 8CX is optimised for running Windows and features an eight-core CPU and Adreno 680 GPU with DirectX 12 support. In May, Qualcomm marketing veep Don McGuire stated that "there will be at least 4" 8CX devices coming to the EU. The company also demonstrated superior performance from an 8CX versus an eighth-gen Intel Core i5.

We got a quick hands-on with the Galaxy Book S at the Samsung press briefing and again at Microsoft's IFA booth. It is slim and light, but then so too were the 10th-gen Intel Core i7 devices we had seen earlier. The shiny screen made reflections a problem under the IFA spotlights and it seems unexceptional, other than for the great connectivity and battery life.

Microsoft is rumoured to be working on a Surface model codenamed "Excalibur" that will run on Snapdragon 8CX.

Previous Windows-on-Arm devices have not won much market share, partly due to lack of availability, and partly because they are expensive. Lenovo's C630, which was launched last year based on the older and slower Snapdragon SDM850, has only recently arrived on shelves in Europe. Lenovo did not announce any new Windows-on-Arm models at IFA, though, nor did other PC stalwarts such as Asus or Acer.

At its IFA press conference, Intel took a swipe at Windows on Arm, highlighting compatibility issues with NordVPN, Dropbox, Logitech and Plantronics applications, as well as 64-bit games.

Why bother with Windows on Arm? The main attractions are lower power requirements and integration with Qualcomm's strong modem technology, such as the X24 LTE modem built into the 8CX chipset.

The case against includes lack of x64 emulation, some compatibility concerns, and the fact that the models to date have tended to be at premium prices.

Intel has not caught up with Qualcomm or Arm in terms of power efficiency, but its recently released mobile 10th Gen series, available in Core i3, i5 and i7 variants, do achieve better performance and efficiency than earlier models. These processors seemed to be everywhere at IFA, in lightweight devices like Acer's updated Swift 3 and 5, Asus ASUSPRO B9, and numerous Lenovo ThinkPad and ThinkBook models. ThinkBook is a budget range aimed at small businesses, starting at €665. These devices typically have 10 to 12 hours battery life, which may be sufficient for most users. Longer battery life is convenient, but with overnight charging, even 10 to 12 hours is enough for most purposes.

A Windows-on-Arm laptop could still succeed with the right blend of performance, connectivity and price – but we still await that killer combination. ®