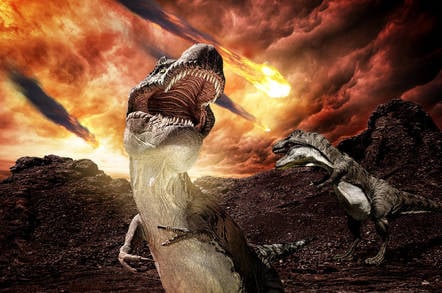 A real photo from the asteroid impact, obviously

Geologists believe they have found rocks that filled the impact crater of the gigantic asteroid that pummeled Earth and killed off the dinosaurs some 65 million years ago.

These rocks may have clues to the conditions on our planet shortly after the cosmic prang.

The catastrophic crash was about as powerful as setting off at least 10 billion Little Boy A-bombs, the type dropped on Hiroshima. The smash triggered wildfires, tsunamis, and sent up thick wafts of sulfur that choked out sunlight long enough to cool global temperatures down, leading to the extinction of the dominant species on the planet at the time.

Now, a large team of scientists led by eggheads at the University of Texas, Austin, in the US reckon they have uncovered the rubble that rushed in to pack the gaping hole after the asteroid struck. Known as the Chicxulub crater, it's located in the Yucatán Peninsula in Mexico. Here, the researchers drilled into the ground to examine samples of the rock miles below the impact site.

They discovered layers of charcoal, debris washed in by the tsunami, and a telltale lack of sulfur. All of this supports the theory that the impact vaporized sulfur in mineral deposits and the cores allowed the researchers to piece together what happened after the impact.

Within tens of minutes of the strike, the ring of rock around the impact point was smothered in about 40 meters of melted rock. Within an hour a thick layer of suevite, a type of sedimentary rock formed during impacts, piled 10 meters on top. Several hours later, the hole had filled to 80 meters and after a day, the material swept in by the tsunami deposited sand, gravel and bits of charcoal, according to the paper’s abstract published in the Proceedings of the National Academy of Sciences of the United States of America.

“It’s an expanded record of events that we were able to recover from within ground zero,” said Sean Gulick, a geosciences professor at the University of Texas Austin, who led the study. “It tells us about impact processes from an eyewitness location.” After a day, about 425 feet of material had accumulated, the highest rate of outpouring of rocks that has ever been recorded in Earth’s geologic history.

The team estimates that the asteroid released four orders of magnitude more sulfur than that which was expelled during the 1883 eruption of Krakatoa. That event chilled Earth’s global temperatures by about 2.2 degrees Fahrenheit for five years, causing famines as some crops failed.

With the skies filled with smoke and dust for possibly years after the event, and sulfurous acidic rain pouring down, the dinosaurs and many other species had little chance to survive. Luckily for us, a small mammalian ancestor or two survived the big chill and went on to evolve into us.

“The real killer has got to be atmospheric. The only way you get a global mass extinction like this is an atmospheric effect,” Gulick said. “We fried them and then we froze them. Not all the dinosaurs died that day, but many dinosaurs did.” ®

Hey, fatso. If you're standing desk-curious, the VariDesk Pro Plus won't break the bank

And when you're too tired, you can lower it again. QUITTER!

Page File Apocalypse now, and tomorrow, and the next day, and the day after that ...