Handcranked HTML and JPEG japes. What could possibly go wrong? 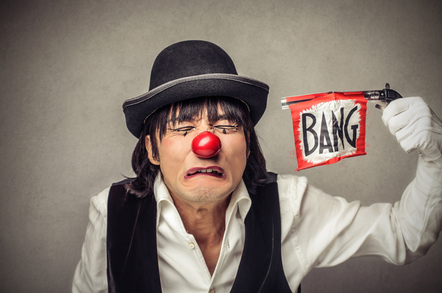 Who, Me? Welcome to Who, Me?, The Register's weekly forage through the hedgerows of reader's misdeeds and tumbles into the ditch of IT despair.

Today's mea culpa comes from a reader whom we will call "Fiona" and is a cautionary tale for those who are partial to a bit of fun on the development server.

Fiona's story takes us back to what she calls "the dark ages of web publishing, before set release processes were 'a thing'" – ah yes, the Good Old Days.

Sounding less than impressed with her lot in life, Fiona told us "I was shackled to a galley bench... er... working... with a handful of overworked web developers employed by (at that time) the planet's largest and most powerful mutual fund company."

Divert the power to the shields. 'I'm givin' her all she's got, Captain!'

The team were working to what Fiona called "a stupidly aggressive launch date dictated to us by Someone In Marketing" and were handcrafting HTML pages for a financial education course. The horribly manual process meant that every time something changed in the format, all those painstakingly written pages had to be reworked.

And those changes, said Fiona, occurred with "carpal-tunnel-inducing frequency."

To lighten the mood, Fiona decided to make some "improvements" to the image of the finance guru after whom the course was named. After all, his picture was all over the branding for the site "and frankly, we were sick of looking at him."

The idea was enthusiastically received by the team and Fiona cast off her HTML shackles in a flourish of creativity. The luminary received some horns and a moustache (twirly, we assume.) His eyes were turned red and a devil's tail was sent snaking up behind him.

The gang uploaded the image to the development server and Fiona told us "all I can say is, it was a far more appropriately branded series. Hilarity ensued."

Had the story ended there, then all would be good. However, when the time came for the webmaster to publish the thing to production, a list of files from development server's /images/ directory was simply slurped and spat into the publishing routine.

This was not a problem "since in the meantime, we'd renamed the cleverly reworked... or, rather, 'offending' image to something that wasn't referenced by any code in any page.

"Everything looked as it should in the courseware. Nobody would be the wiser... no harm, no foul."

A year later, Fiona received a telephone call from the security team, requesting her presence in order to answer a few... questions.

She found herself in meeting with a stern-faced gentleman, who was blessed with a haircut favoured by certain military organisations. The two had a lovely chat about an audit that had been performed on the production servers, and about a certain image that had been found. With Fiona's digital fingerprints all over it.

The image was pulled up onto the screen and Fiona was unable to suppress a snort of laughter: "It actually was a very convincing likeness of a moustachioed devil. I recalled with fondness the comic relief it had provided."

Alas, nobody else was amused and the security officer suggested her intentions were less than innocent. Phrases such as "deliberately trying to undermine the Company Brand" and "created out of malice" were thrown around as Fiona pleaded soul-suckingly extenuating circumstances. She protested that the image should never have made it that far if the release manager had been on the ball, and that since the image was not referenced by any code, it would never have been seen.

"I barely got out of there with my job intact," grumbled Fiona. "Good thing, too, because my performance shares hadn't matured yet."

Fiona also didn't hand in the names of the rest of the gang "as much as I wanted to turn in the numbskull webmaster who'd been asleep at the wheel with that assets list." Instead, she was rewarded with a lecture from a HR contractor on how she should have known she'd never get away with "something like that."

"Insult and injury and all that. File that under Code I-D 10 T."

Ever indulged in some japery and found yourself on the receiving end of a stern finger-wagging when it all went just a bit too far? Or maybe done something that you thought someone would catch... but they didn't? You're among friends here – tell us all about it. ®