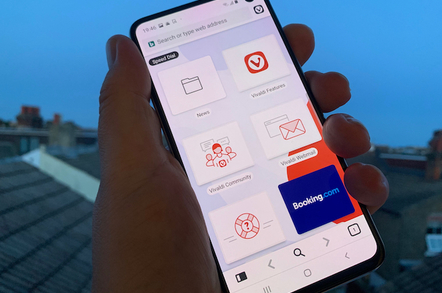 The Android app has been a long, long time coming. CEO Jon von Tetzchner told us back in 2016 that something was in the works. The gang was still working on it last year, with Von Tetzchner admitting the first iteration would be "relatively simple."

And now, finally, the first version has dropped. We got our claws on a copy over the weekend, and fired it up on a Samsung Galaxy S10e, running Android 9, although it should work on Android 5 and up.

The first impressions are, well, it's a browser, innit? We didn't encounter any issues, compatibility or performance-wise in day-to-day use and, to be honest, with the rendering engine coming from Chromium, that isn't a huge surprise.

However, since this is Vivaldi's browser, it is also free from Google's creepier tendencies. It doesn't use Google's Android web browser core and the company proudly boasts "we don't track you."

Indeed, there is no sign of Chrome's syncing here. While Vivaldi does keep a user's settings synchronised over desktop and mobile, assuming the user has a Vivaldi account, those settings are end-to-end encrypted, meaning that while data will lurk on the company's servers, it can't look at it.

The company's servers are located in Iceland, rather than floating about in a third-party cloud. Von Tetzchner explained the thinking behind the location: "We like to keep them in one location for simplicity, security and privacy. By using our own servers, we have the best control."

In answer to a question about some users preferring to pick and choose where their data is stored, he told us simply: "It would quickly become really complicated with servers in many locations."

Worried users can simply not use the Sync process at all, or pick and choose a synchronisation selection that includes Bookmarks, Speed Dials, saved passwords and autofill information, History (with only typed URLs), and Notes.

For a first version, the browser is impressively full-featured. Those used to the desktop version will feel at home, with familiar Speed Dials and Bookmarks. The address bar works happily with a variety of Search Engines (our trial version defaulted to Bing, but a user can switch providers in the address bar itself) and the company is very pleased with its Notes functionality, which allows a user to add, er, notes without jumping out of the app.

We're not sure about the latter feature – there are plenty of good note-taking tools out there that will cheerfully synchronise over devices, but it's a handy thing to have, particularly if you're worried where that data might end up.

Overall, this is a solid first version and will make life considerably easier for the company's desktop customers, who might have cast the odd envious glance at their Chrome-using colleagues with their sync-happy browsing. The inclusion of features familiar to fans of the app's bigger brother will also appeal.

However, the mobile browsing market on Android is getting a tad crowded of late, particularly with Microsoft's own Chromium-based browser, Edge, attracting attention.

And then, of course, there is the whole Apple thing. Von Tetzchner told us that the priority right now was Android. "We can reuse code on Android and utilise the same code base," he said, adding: "Apple does not allow us to use the same code on iOS, so it requires a lot more work to deliver on that platform."

However, iOS fans should not lose all hope. The gang hope to make a version available on Cupertino's platform "some time in the future" but, well, don't hold your breath: "Ideally that would be through Apple allowing us to reuse our code, but we aim to make it happen anyways."

The company added that a version with a UI better suited to tablets was in the works.

And that long, long awaited email client? A spokesperson told us that "the goal is [to] get it out soon." ®