D'aw! They still have hope! Interns make a song and dance of their summer at Microsoft 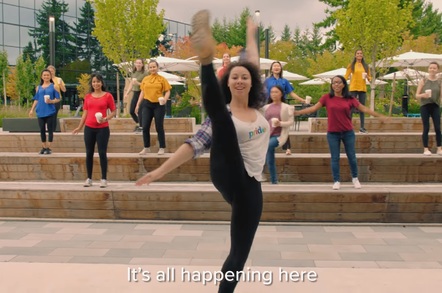 Roundup While trying not to let themselves be too distracted by the 30-odd interns doing Glee Club in the courtyards of Redmond, Microsoft workers kicked off September with a flurry of releases for Windows 10, .NET Core, Visual Studio and more.

Microsoft goes all Musical Theatre for its latest video

Interns and employees at Microsoft have found time to put together a musical number extolling the virtues of the company and its former CEO, Bill Gates. A little good-natured shade was also thrown over Windows Vista and the company's ill-fated foray into the mobile phone market.

Compared to the buttock-clenching awkwardness of some of the company's recent marketing attempts, it is difficult to fault the enthusiasm on display from the workers who have clearly shovelled bucketloads of effort into the work.

Microsoft isn't alone. The likes of SUSE have, of course, famously made use of the odd musical number or two. Redmond's take, however, has a refreshingly am-dram tinge to it. We rather hope that a few of the group might appear on stage to enliven some of the more worthy and interminable keynotes spat out by certain execs.

A director's note from Data Science Intern Liam McGregory insisted that a total of 150 participants put in the hours outside of their regular jobs.

Good to know for those concerned that recent Windows snafus might have been due to too much dancing and too little debugging.

While testers of the next version of Windows 10 (aka 19H2) were put on a more or less equal footing last week, Microsoft was up to its old tricks with next year's Windows. At least as far as the dozen or so users who actually care about Cortana are concerned.

Build 18975 was light on eye-catching features, as evidenced by the Windows team proudly announcing that you can now move the Cortana chat window anywhere you like. Just like, er, a normal windowed app.

Bizarrely for such a seemingly simple feature, only 50 per cent of Microsoft's Fast Ring Windows Insiders will actually get to play with it while the company validates "the quality of the experience".

More useful is the naming of Virtual Desktops, which has now been rolled out to all of Microsoft's unpaid testers in the Fast Ring.

The gang has also tweaked the second coming of the Windows Subsystem of Linux to deal with a TCP issue related to how WSL 2 implemented localhost. The problem, which forced several users to fall back to using an IP address or various workarounds, and its resolution is a good example of how the issue tracking for WSL 2 is being done on GitHub.

The Windows Insider team, with its infamously iffy communication, could perhaps take note.

.NET Core 3.0 homes in on a September release

A final buffing of .NET Core 3.0, Microsoft's crack at eventually replacing the venerable .NET Framework with something a tad more open source and dynamic, was emitted last week in the form of Preview 9.

Program manager Richard Lander again warned that the release lacked new features as the team focused on the last fit and finish ahead of a final release at the .NET Conf between 23 and 25 September.

While Microsoft insisted that the preview was ready for production, and is using it itself on the .NET site, it would seem prudent to wait a few more weeks for the final release or possibly hang fire until November, when the Long Term Support (LTS) 3.1 version is due.

.NET Core 3.0 can be used on macOS, Linux and, of course, Windows. Lander also cautioned that Visual Studio users keen to play with it should be running version 16.3 on PC and the just-released 8.3 Preview 3 on Mac. The reason? "We only test .NET Core 3.0 with Visual Studio 2019 16.3 and have made many improvements and key fixes that are only in 16.3. The same model applies to Visual Studio for Mac 8.3."

The Entity Framework Core 3.0 and Entity Framework 6.3 also hit their ninth preview ahead of the impending final release. Like .NET Core 3.0, the team is focusing on fixing issues rather than folding in new features.

However, program manager Diego Vega cautioned that LINQ in Entity Framework Core 3.0 was implemented quite differently from earlier versions and that users stood a good chance of running into problems.

One of the suggested workarounds was good old-fashioned raw SQL queries.

Case preservation has been spread over multi-file search and replace operations, with hyphen-separated words also optionally keeping case. The settings editor has received some additional smarts, and will now flag up arrays that don't match the schema, and the number of visible lines to display around the cursor when moving towards the beginning or end of a file can also be customised.

Well-heeled Mac users with the company's premium laptops can also now toggle individual VS Code commands on the Touch Bar.

Away from the array of editor tweaks, VS Code now ships with an updated TypeScript – version 3.6.2 – and also adds Data Breakpoints, which halt things when the value of an underlying variable changes (assuming the runtime or debugger supports the function).

Remote development fans will also be pleased to see the arrival of support for Alpine Linux Containers and Alpine WSL Distributions in preview form.

Not to be outdone by the upstart Visual Studio Code, a third preview for the Mac take on Visual Studio was emitted last week, with the aim of simplifying things for ASP.NET Core developers.

The web editors in version 8.3 Preview have been updated to share the same UI as the C# and XAML editors. The web files, which include HTML, CSS and JS, get to make use of the language services found on Visual Studio on Windows, replete with the same code formatting, syntax highlighting and IntelliSense support.

Editor aside, the update also adds a simple Target Framework drop down at the top of the editor window and NuGet solution-level package management.

Microsoft has yet to release the HoloLens 2, but judging by figures from game shack Steam, the usage of its other tilt at virtual reality is continuing to drop.

Figures released show the share enjoyed by Windows Mixed Reality now stands at 8.24 per cent, having briefly flirted with 11.1 per cent in recent months.

New VR hardware from Microsoft has been conspicuous by its absence, with even the recently opened UK Microsoft flagship store reluctant to mention the things (although staff were very happy to talk HoloLens).

Despite occasional glimmers of light in the form of HP's recent and much-delayed Reverb, existing players Oculus and HTC continue to dominate.

Somewhere, deep within the bowels of Redmond, we fear the Windows Phone and Microsoft Band axe is being sharpened once again. ®