In Hemel Hempstead, cycling is as bad as taking a leak in the middle of the street 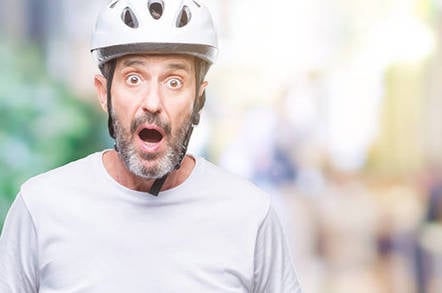 A newly introduced Public Spaces Protection Order (PSPO) in the Hertfordshire town of Hemel Hempstead has managed to lump the relatively harmless pastime of cycling in with publicly relieving oneself.

Dacorum Borough Council's move, which came into effect on 29 July, aims "to control anti-social behaviour and dog activity in the borough".

So of course they're going after the Lycra-clad scourge of highways and byways the length of the county – the cyclist. Oh, and those kids on their skateboards with their beanies and baggie trousers and loud rap music.

"Cycling and skateboarding in an area of Hemel Hempstead town centre will carry a £75 fine under the PSPO, which also bans spitting," the order reads – including the "discharge of chewing gum" if there was any doubt – as well as "urinating or defecating in a public place".

Does that include public toilets? Reader Neil, who lives in the town and alerted us to the story, doesn't think there are any.

It continues: "The other PSPO promotes responsible dog ownership across the borough. This order covers five areas, including failure to pick up after your dog, failure to carry a dog poo bag and failure to keep your dog out of play areas.

"Dog owners will be required to keep their dogs three metres away from unfenced play areas in the borough, including the one in Gadebridge Park."

OK, fair enough, we suppose. But if you were planning on taking a ride down to the shops, you may as well be pinching one off on the steps of the town hall.

The anti-fun law was noted by resident solicitor Kerry Underwood on Twitter and picked up by cycling mag road.cc.

The cycling may seem on but I can assure you its welcome. The centre is pedestrianised and will prevent the numerous little #*$@s who do wheelie, cycle deliberately into pushchairs and the elderly and cause a great deal of grief.

Some welcomed the order, as above, but others suggested the outlawing of two-wheeled transport was "equivalent to banning all motor traffic from a road because a handful of drivers are speeding".

"Well that's a pity," one commenter on road.cc's article sighed. "I was going to take the family out for a day of shitting in the street in Hemel Hempstead."

Maybe the poor chap from Torquay whose Honda Jazz was used as a toilet by a passing drunkard could look into a PSPO of his own.

Thanks, Neil, for the headsup. ®

In some of UK's worst flood-hit areas