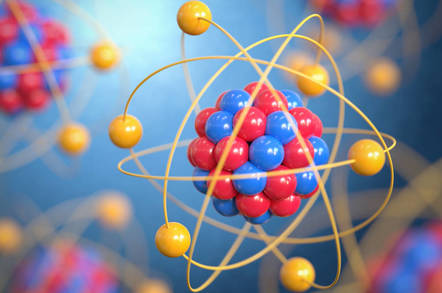 The positively charged proton sitting inside the nuclei of atoms has a radius smaller than a trillionth of a millimeter, according to a paper published in Science on Thursday.

Scientists have been scratching their heads over the size of the proton. Various methods used to measure the subatomic particle’s radius produced different numbers, something boffins dubbed the proton radius puzzle. This latest study concluded its radius is just 0.833 femtometers – that's 0.833 x 10-15 meters.

“The level of precision required to determine the proton size made this the most difficult measurement our laboratory has ever attempted,” said Eric Hessels, coauthor of the paper and a professor working at the department of physics and astronomy at York University in Canada.

The number 0.833 femtometers is pretty close to a previous estimate of 0.840 femtometers made by another group of eggheads in 2013. It is, however, about five per cent smaller than today's official value of 0.876 femtometers.

“The discrepancy between the proton size deduced from the Lamb shift in muonic hydrogen and the average, textbook value based on regular (electronic) hydrogen has puzzled physicists for nearly a decade,” the paper’s abstract said.

Measuring the Lamb shift in muonic hydrogen is a fancy experiment that allows scientists to narrow in on the proton’s size. First, muons are put in orbit around protons to create muonic hydrogen. It’s an unstable arrangement and, as the structure decays, an electron falls from two different energy levels, emitting an amount of energy known as the Lamb shift.

The difference in energy levels is affected by the electron and proton interacting with one another. By measuring the Lamb shift, it allows physicists to probe the proton’s properties. Physicists from York University and the University of Toronto, Canada, spent eight years devising their own version of the experiment to measure the proton’s radius. ®