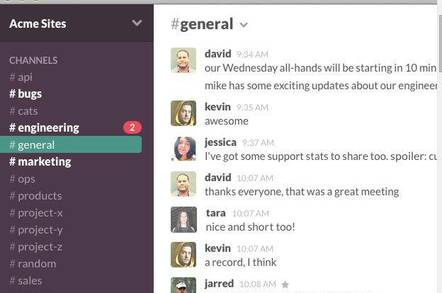 Slack shares got hammered last night in its maiden results after listing on the NYSE in June, despite the collab company beating analyst forecasts for second quarter sales.

There were a few bumps on the road, including the $8.2m in credits it dished out to customers for service failures, as revealed in the financials for the three months ended 31 July. However, it was the firm's predictions for Q3 – guiding for increased losses – that pushed shares down more than 15 per cent. Investor darling Slack, despite being one of the fastest-growing software-as-a-service outfits ever and with a market cap of over $15bn, has never made a profit.

A 48 per cent year-over-year revenue growth may sound more than respectable to many of us, but this is nonetheless down on the 82 per cent revenue growth of the prior year (see its IPO filing with the SEC here).

For the full year, the collab firm upped guidance to predict revenues of between $603m and $610m.

Slack's CEO Stewart Butterfield said the company was moving from its first fit with smaller and more technical customers to large enterprises as its compliance and admin functions improve.

"We came out of the gate with near perfect product market fit for our very earliest customers who tended to be smaller and more technical teams. But over the years, as we launched the Enterprise good product, scaled the teams of over 100,000 users, added key features for our security, administrative control and compliance, we begin to see real product market fit for the large enterprise use case."

He used the conference call to crow about two customers, one in healthcare and one in financial services, that had chosen to use Slack despite using Microsoft's Office365 which offers its own collab products – MS Teams and SharePoint. This battle with Microsoft is seen as the key barrier to Slack's path to profitability, especially since Microsoft began offering a freemium tier of Teams in June last year and is also available as part of a Microsoft Office 365 subscription.

Butterfield said the downtime had been caused by issues with "scaling" the product up, but claimed to be confident the company had the staff, investment and added use of automated testing to solve the problem.

Analysts at Megabuyte have noted that Slack's predicted losses signalled its need to "spend heavily on R&D to remain ahead of its main competitor, Microsoft Teams".

There's a full transcript of the earnings call available on Seeking Alpha here. ®