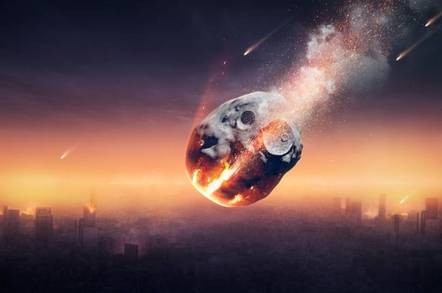 A loud boom heard over the US state of New York on Labor Day could have been the result of a fireball arriving from space... or a military jet thundering through the skies... or something else, according to the American Meteor Society.

Folks enjoying their Monday off were interrupted that late afternoon by what sounded like an explosion rippling through the center of the Empire State. A few people even called 911 to report the noise. Some feared it was a meteor detonating in Earth's atmosphere, creating a fireball and subsequent blast.

Mike Hankey, operations manager at the non-profit society set up by amateur and professional astronomers, told The Register on Wednesday that the source of mystery rumbling has yet to be confirmed. It was earlier reported by the media that it was probably a lost space rock winging its way into our skies.

“We thought it might be a fireball, but we don’t know,” he told us. “All the evidence pointed to a fireball, a natural bright meteor that can explode in the atmosphere and create a sonic boom. But now there is some evidence that it could be from a military jet.”

The meteor society has 19 reports of a fireball at 2109 UTC (1709 EDT), with sightings in New York, Pennsylvania, and even some parts of Canada.

“There are a few things about it that are weird," Hankey continued. "More people seemed to hear the noise rather than see a light flash. Most of them who heard it were in the Syracuse and Rochester area. Also sensors detected that the noise was 20 kilometres from the ground – that's too low for most fireballs.

"So, we don’t really know. I contacted the Air Force Space Command and they said they were investigating the matter, too."

Hankey forwarded us an email he had sent the US military letting it know of the puzzling big bang. According to the ops manager, an official replied: “We're checking on it with our folks in California. Thanks for letting us know. We're getting media queries as well."

Prettier than normal with a little help from friendly gas giant