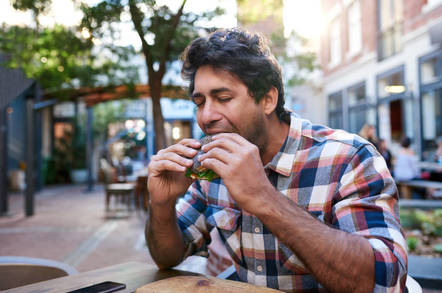 Note: This is not a real picture of the driver.

The Tesla driver who crashed into a stationary fire truck may have had his hands off the wheel, and Autopilot engaged, as he ate a bagel and drank coffee, according the US National Transportation Safety Board on Tuesday.

Robin Geoulla was cruising along the Interstate 405 South in Culver City, California, on 22 January, 2018, at 65 MPH when his Tesla Model S slammed right into a parked fire truck. In an interview [PDF] with Kenneth Bragg, a human performance investigator at the National Transportation Safety Board (NTSB), Geoulla said although his vehicle was in Autopilot mode, it didn’t flash its lights to remind him to keep his hands on the steering wheel. (Tesla drivers are supposed to remain in control, with their hands on the wheel, even when semi-self-driving Autopilot mode is active.)

“I remember that day it didn't ask me to hold the wheel," the motorist told the investigator. "My hand was right there under it but it didn't ask me. And I was just sitting – I wasn't on my phone. I wasn't – nothing special. There was nothing special about that day. My coffee was next to me; my bagel was next to me. I was having a coffee and a bagel. And all I remember, that truck, and then I just saw the boom in my face, and that was it.”

Just before the prang, a fire truck and a California Highway Patrol vehicle had stopped on the High Occupancy Vehicle lane with their emergency lights flashing. At approximately 0840 PST, Geoulla smashed into the rear of the truck. Luckily, no one was harmed in the accident.

Phone records show Geoulla was not texting or talking to anyone on his phone. “However; because after the crash his coffee spilled and his bagel was smashed, the driver is not sure if his coffee or bagel was in his hand when the crash occurred,” according to the NTSB’s probe of the prang. [PDF]

He said his eyes were on the road, and he was looking ahead just before the collision. “I honestly don't know what it was, but it was – nothing, nothing out of ordinary," Geoulla said. "It wasn't like I was, you know, I was sleeping or nothing – you know, nothing like – just normal.”

Geoulla said the car was used when he bought it, and that he had had it for about five or six months before the accident. “I think it does have flaws,” he said when he was describing Tesla’s super-cruise-control-ish Autopilot feature.

“I think it was named wrong. For the purpose of helping a driver, it's a very good technology. Because it's not an autopilot. It's a very good cruise control with a little bit more advanced technology in it,” he warned.

Other Tesla drivers operating in autopilot mode have been less fortunate. There have been four fatal accidents so far. The last one occurred earlier this year in May when a driver crashed into a semi-trailer truck on a highway in Delray Beach, Florida. ®