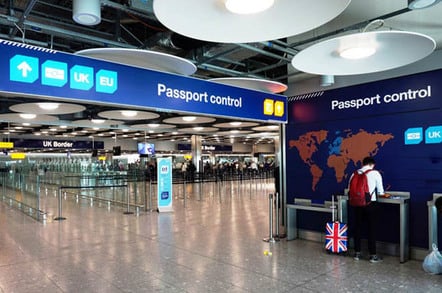 The Home Office has inked a £45m 33-month contract extension with IBM for its creaking Semaphore border technology contract.

The Semaphore database, which has been running since 2004, collects data from airline carriers about persons of interest and those who are on watch lists before they arrive at the border.

It was created ahead of the troubled e-borders contract with Raytheon, which was cancelled in 2010. In the process the Home Office had to settle the dispute relating to the cancellation of the £750m contract: paying £150m to the supplier Raytheon and £35m on legal fees.

However, the latest extension suggests its successors, the Border Systems Programme and Digital Services at the Border, will not provide a replacement for the database for several years.

According to the tender note, there had not been a prior publication of a call for competition because for "technical reasons, only the incumbent can deliver the service for the required term."

The notice said this is a "short term interim contract with flexible termination options with the incumbent supplier, whilst longer term re-procurement/reorganisation activity is taking place to deliver the replacement systems and services."

A 2018 report (PDF) from the chief inspector of borders and immigration, David Bolt, found that the processes within the Home Office are "unable to fully exploit the potential of the data it is receiving". At that point there still seemed to be plans in motion to replace Semaphore by March 2019.

It found the details of 600,000 foreign visitors have slipped through the cracks of the Home Office's database thanks to its "shambolic" exit checks system.

Between April 2014 and April 2015, as part of the Exit Checks Programme, the Home Office developed the Initial Status Analysis database, which matches inbound and outbound travel data received via Semaphore with data recorded on its other immigration related systems.

The report recommended: "Plans for the replacement of Semaphore are revisited and firmed up and, pending its replacement, maintenance and support for Semaphore is prioritised."

Georgina O'Toole, analyst at TechMarketView, noted: "The IBM e-Borders programme has faced ongoing difficulties, and that was without bringing Brexit into the equation.

"Adding the fact that the department is faced with uncertainty, and the knowledge that systems will need to cope with new rules post-Brexit, an extension like this was, arguably, inevitable." ®

Review Civil servants still don't care 'cos its not their cash... except it is

Analysis Margaret Hodge calls for boycott. So where does that leave Whitehall?