The Register goes to Cambridge 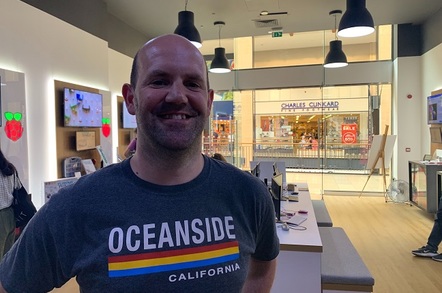 Interview The Register popped into the Raspberry Pi Foundation's retail outlet in Cambridge to chat with founder Eben Upton about power, sales and occupying the family television.

It is less than eight years since the first Pi fell into the hands of excited users. Sales of the diminutive computer, produced by a Sony facility in Wales, have hit around half a million units a month. The most recent incarnation, the Pi 4, accounted for half a million on its own since its June launch.

The store itself opened its doors earlier this year and, like the computer itself, has evolved since the first customers arrived.

The space is still dominated by a central desk, at which users can partake in a bit of training and general hands-on Pi bothering, and six stations against the walls showing off uses for the device. The sales desk, however, has been pushed to the rear and now features a rogue's gallery of old Pi prototypes for the curious.

The gang are scouting for a second location, which (if opened) will likely follow the same basic formula.

In the meantime, there are plenty of toys and accessories at the current outlet to dent the wallet, including a variety of the new, go-faster Pi 4 models.

The Pi 4 has had some unwanted attention since its launch back in June. By the following month, a hardware issues with the USB-C power connector meant that some smart power supplies opted to treat the device as an audio accessory rather than supply the requisite juice. Less than a fortnight later, grumbling surfaced over the worrying levels of heat the thing was generating while idling.

It's getting hot in here

While there is little that can be done about the USB-C snafu without some hardware updates, Upton continues to pin his hopes on a firmware fix for the thermal situation. Observing that the Pi 4 tends to idle "in the low 60s" compared to the previous generation, which he reckoned "idled in the low 50s", he told us that software tweaks should help.

Part of that fiddling, a change to the USB controller, is in beta form at the moment, according to Upton, but not "quite ready for prime time yet". Other software changes are also planned in the power system in the hope of getting those idle temperatures down.

Despite Upton's protestations, we couldn't help but notice some fans that fit inside the standard Pi case lurking on the shelves in the Raspberry Pi Store, handily next to the range of Pi 4 devices. Naturally we picked one up (LESTER is quite a hungry beast when it comes to optical processing) and the drop in temperature once fitted was marked.

Those software changes will have their work cut out to match an active cooling solution (as, to be fair, they would on earlier versions of the Pi).

However, would the computers be fitted with heat sinks or fans out of the factory? The answer was a qualified no.

Certainly, the silence and simplicity of the fanless Pi is appealing. Upton also reckoned that "we've kind of come to the limit" in terms of Wattage. "Unless you're going to go to more than five volts" and enter a PC-like world, which would defeat the object of the thing.

And there is, of course, those half-million Pi 4s already lurking out there.

Thanks for the memory

With three memory sizes at launch (1GB, 2GB and 4GB) we were also curious to see what had sold best.

If you guessed 4GB, pat yourself on the back.

Upton put this down to the first wave of buyers wanting the latest and greatest, with the more cost-sensitive opting for the 1GB. He reckoned the 2GB would be picked up by industrial users, purchasing 1,000 or more of the things at a time, and eventually account for 20 per cent of sales ("today it's less than 10 per cent").

And to keep those industrial users happy, the availability of several products has been pushed out to 2026, Upton said.

Handy, because those customers are becoming ever more important. Upton told us that while the US remained the largest customer for the computers, China was now in second place, ahead of the UK and Germany.

Unlike hobbyist or educational buyers, Chinese customers, Upton said, were "largely system integrators" and building the Pi boards into products that were subsequently shipped around the world.

"Local interest in China," he mused, "seems to be going up incredibly fast."

With the extra horsepower and memory, the Pi 4 also represents an intriguing option for those considering a desktop replacement. With Windows 10 IoT running on the previous generation (a number of Azure kits can be found in the Pi store) we asked if the Pi 4 might see some Microsoft love?

"We have nothing to share", said Upton, before sighing that it was "a shame." Some enterprising souls have managed to get as far as running Windows 10 on Arm via KVM and Qemu. Our Pi 4 was having none of it, heatsink or not.

Of course, back when the original Pi launched, Upton said the questions were: "Can you run Office? Can you run Internet Explorer?" Now, the question (which will be music to Linux fans' ears) is "Can you run Chromium?" as the Microsoft requirement dwindles.

And support from the likes of SUSE, which was given Pi 4s ahead of time, has done the platform no harm.

Upton would not be drawn on what form a possible Pi 5 might take, pointing out that the gang had its hands full putting together a Compute Module (CM) version of the Pi 4 in order to meet demand from its industrial customers. He told us everything, from the components on the board (Ethernet, power supply circuitry etc.), to the existing SODIMM CM form factor was up for grabs.

There would, however, be options for 1GB, 2GB and 4GB variants.

But that Pi 5? Don't hold your breath.

There's more chance of a replacement for the AstroPi aboard the International Space Station (ISS) arriving first. The current units are woefully under-specified compared to today's devices used by the thousands of children keen to get their code running on the station. The source produced was often "just not optimised to fly" said Upton.

Rather than making the poppets use something like a Pi Zero, the ideal solution would be to send up a Pi 4. If only it weren't for what Upton delicately referred to as a "certain amount of thermal rejection" allowable aboard the outpost.

Still, Upton told us he hoped that a replacement for the ageing kit could be launched in the next one or two years.

Finally, the Pi supremo told us that while those bonzer sales figures were all well and good, he still enjoyed hearing stories of younger users hogging the family television with their latest and greatest software creations.

Because, even with the commercial interest of nowadays, that was, after all, the whole point. ®