Insane in the brain 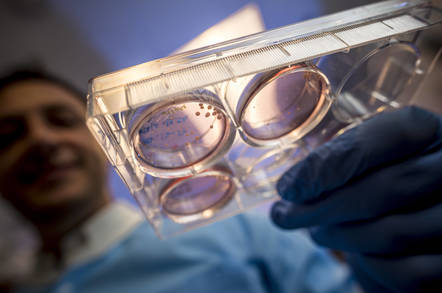 Video Tiny brain cells grown in a petri dish can be induced to emit electrical waves similar to the ones coming from humans, scientists have discovered for the first time.

A group of researchers discovered this oddity when they decided to track the growth of single pluripotent stem cells. These types of cells have the potential to morph into any type of cell or tissue in the body, whether it’s in the lung, heart, or brain.

The stem cells grown in a lab at the University of California, San Diego, (UCSD) were encouraged to become cerebral cortex cells, Alysson Muotri, co-author of the research published in Cell, explained to The Register.

“We start with single pluripotent stem cells, and guide them towards a neural fate by exposing them with specific factors. Then, the cells self-organize and start the maturation process, forming more connections over time.”

Muotri, a professor at the department of pediatrics at UCSD, and his team watched the brain cells develop into a small lumps known as “cortical organoids” over ten months. As they swelled in size, they realized, to their surprise, that the cells were emitting signals that resembled brain waves.

“There is no precedent for this in science. I was very skeptical at first, but after we concluded that this is no artifact, but really, we started believing it,” said Muotri.

It’s the first time that these simple brain waves have been detected in lab-grown cells, but they have been spotted coming from fetuses. “Five years ago, I would say that it would be impossible to detect these waves in a brain organoid that was artificially created and outside the uterus. Now, I think it is inevitable,” he added.

As the cortical organoids matured the scientists noticed that the electrical spikes emitted became more complex, firing off at different peaks and frequencies. They are not nearly as electrically active as real, fully formed brains, however. Muotri said the organoids were more like brain signals early newborn babies generate.

That might make it useful to study neurological or psychological conditions that are present in early brain development. “We are now creating brain organoids from people with autism and epilepsy to find better treatments using this model,” he said.

A magnetic robot worm wriggling in your brain

Just in case you needed more of a reminder that the brain is a fascinating organ, here’s more new research. A group of engineers at the Massachusetts Institute of Technology have built a black worm-like device designed to navigate through intricate twists and turns inside the brain’s blood vessels.

You can watch it wriggling about here.

“Stroke is the number five cause of death and a leading cause of disability in the United States. If acute stroke can be treated within the first 90 minutes or so, patients’ survival rates could increase significantly,” said Xuanhe Zhao, co-author of the paper published in Science Robotics and an associate professor of mechanical engineering and of civil and environmental engineering at MIT.

“If we could design a device to reverse blood vessel blockage within this ‘golden hour,’ we could potentially avoid permanent brain damage. That’s our hope.”

The thing is essentially a thin piece of wire coated in a hydrogel substance that can be steered using magnets. In the experiments, the device was guided around an obstacle course made out of various tubes filled with fluid. The researchers hope that they will be able to test their tool in real brains one day.

“Existing platforms could apply magnetic field and do the fluoroscopy procedure at the same time to the patient, and the doctor could be in the other room, or even in a different city, controlling the magnetic field with a joystick,” said Yoonho Kim, a graduate student at MIT. “Our hope is to leverage existing technologies to test our robotic thread in vivo in the next step.” ®