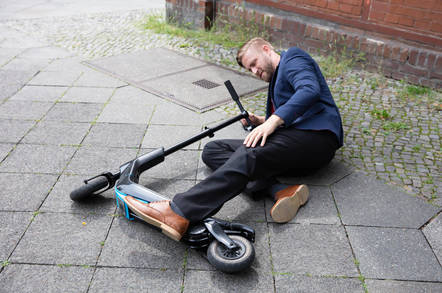 Shock, horror: Young men, who are either drunk, high or both are more likely to get into electric scooter accidents, according to a new study.

“Since their release in 2017, standing electric motorized scooters (eScooters) have risen in popularity as an alternative mode of transportation. We sought to examine the incidence of injury, injury patterns, prevalence of helmet and drug and alcohol use in eScooter trauma,” the paper’s abstract, published in the British Medical Journal’s Trauma Surgery & Acute Care Open journal, read.

So a team of healthcare researchers from the University of California, San Diego, the Scripps Mercy Hospital and the Dell Seton Medical Center, analyzed data from patients, who had been admitted to hospital for e-scooter accidents over the course of September 2017 to October 2018.

They studied things like the patient’s demographics, drug and alcohol use, if they were wearing helmets, what kind of injuries they sustained, how long they stayed in intensive care and if they died.

And what they found was downright appalling. Out of the 103 people wounded from accidents with bloody e-scooters, 65 per cent were men, with a mean age of 37.1 years old. A whopping 98 per cent of them admitted they weren’t wearing helmets. What’s worse is that a lot of them were also drunk or high.

The results said that out of the 79 per cent of patients tested for alcohol, 48 per cent of them had a blood alcohol of over 0.08 – a level above the legal driving limit. About 60 per cent of participants also underwent urine toxicology tests, and, here, 52 per cent of them tested positive for illicit drugs.

Tut, tut. So what were the most common types of injuries they deserved sustained? Just under half of them had fractured limbs, next up was facial fractures, and then brain hemorrhages. No one died, thankfully.

“Interventions aimed at increasing helmet use and discouraging eScooter operation while intoxicated are necessary to reduce the burden of eScooter-related trauma,” the researchers concluded. Well, you don’t say. ®

Boffins get fish drunk to prove what any bouncer already knows