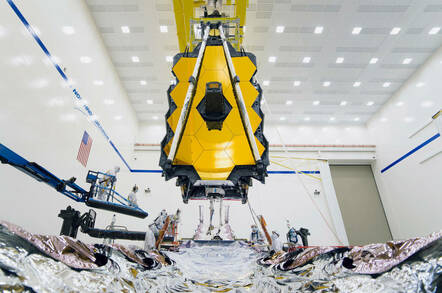 The project has had a rocky road. Originally scheduled to enter space as early as 2007, the instrument has been bedeviled with numerous delays, including a redesign and an accidentally ripped sunshield that had to be repaired. The telescope is now due to be sent up into space some time in 2021.

Its most striking feature is the 6.5-meter mirror fashioned from gold hexagonal plates. Older designs show them all arranged in a hexagon shape, but the new images feature twelve stacked on top of each other to make the telescope look like a honeycomb tower. Two columns of three hexagonal mirrors are placed on either side.

Most of the telescope had been put together already. All the team had to do was attach one half that holds the mirrors and instruments with a second half featuring a flat silver sunshield that will unfurl around the bottom of the device. The shield will stop light from our sun interfering with readings.

When it is finally launched, it’ll be the most powerful telescope in space, and will actually orbit the Sun rather than the Earth (the Hubble Space Telescope, for example, orbits the Earth), at the second Lagrange point (L2), 1,500,000 kilometers (930,000 miles) away from our planet. This means that the telescope will stay lined up with the Earth as they both move around the Sun.

The telescope operates on the infrared wavelength scale, and will be able to probe the earliest energies emitted after the Big Bang to the formation of new exoplanets in faraway planetary systems, but also at objects closer to home.

But before it makes it out of the gravity well, scientists will run more deployment tests on the instrument under various environmental conditions to ensure it’ll survive out in the cold, dark depths of space.

“The assembly of the telescope and its scientific instruments, sunshield and the spacecraft into one observatory represents an incredible achievement by the entire Webb team,” said Bill Ochs, the James Webb Space Telescope’s project manager.

“This milestone symbolizes the efforts of thousands of dedicated individuals for over more than 20 years across NASA, the European Space Agency, the Canadian Space Agency, Northrop Grumman, and the rest of our industrial and academic partners.”

The James Webb Space Telescope is led by NASA, but will be shared with the European Space Agency and the Canadian Space Agency, both of whom have contributed to its (currently) $9.6bn cost. ®