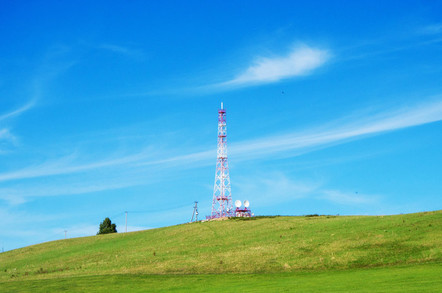 The British government has raised the spectre of giant mobile masts looming large over the English countryside in its 5G consultation review paper as a further loosening of planning regulations is considered.

Under the the Electronic Communications Code, the current height restriction for masts is 25 metres – and 20 metres in protected areas. Masts tend to be much shorter in urban areas, where they are more densely distributed.

In the snappily titled "Proposed reforms to permitted development rights to support the deployment of 5G and extend mobile coverage" joint document (PDF), the department for Digital Culture Media and Sport and Ministry of Housing, Communities and Local Government have not specified a new height for towers.

An amendment to planning regulations in 2016 in England allowed operators to extend existing allowed development rights to green light ground and building-based mobile telco masts to be erected without applying for full planning permission.

"We are now considering further reforms to the planning system in England in order to support the network upgrades that will be required to deploy 5G and to extend network coverage, particularly in rural areas," the joint document states,

The government is obviously keen to push 5G, stating in its Future Telecoms Infrastructure Review (PDF) it wants the majority of the population to have 5G coverage by 2027. Whether the network infrastructure that helps it get there is based on Huawei kit is a moot point - although it is something mobile operators are keen to see concluded. A decision on the extent of the inclusion of Huawei in 5G has been twice delayed. Digital Secretary Nicky Morgan has said the government hoped it "could do something by the autumn".

Not spots and rural coverage

Yet 4G still remains patchy in large parts of the country. Ofcom's recent Connected Nations 2018 report found that good 4G coverage is only available across 67 per cent of the UK from all four of the main mobile network operators (EE, O2, Three and Vodafone).

"Rural areas tend to be more severely affected by poor mobile coverage, though we recognise that it can affect other areas such as business parks, market towns and new build developments," noted the 5G consultation proposals.

"It's all sensible stuff - at least from the viewpoint of delivering better/cheaper mobile coverage," he said. "The [mobile network operators] were generally campaigning to be allowed to go to 30m height… It'll help make rural coverage cheaper. Of course, it has little to do with 5G, which [generally] won't be deployed in rural areas anyway. But it'll help improve 4G coverage."

Naturally, the move is bound to bring objections regarding the environment and aesthetic concerns, said Webb. "I'm sure that those concerned about health will object. Actually, anything that gets the antenna further away from the person (eg a higher mast) reduces the exposure to electromagnetic energy so it should actually improve things, but I doubt that this logic will sway those protesting."

However, in order to maximise coverage, a lot depends on the topography, said Andrew Ferguson of Think Broadband. "Assuming flat topography, a change from a 25m mast that had a reach of 1km might reach 2km if increased to 50m in height. Does not sound much much in terms of area covered but you go from 3 square km to 12 square km of footprint."

He added: "One downside to the taller masts is that they will be more visible and the rule changes may mean there are more retrospective objections to masts that may have actually been in place for many years but just short enough no one minded."

Gareth Elliott, head of policy and communications at mobile operator industry group, Mobile UK, welcomed the move saying it will ensure the current planning regime is "fit for 5G and 4G rather than the current regime which is for 3G and 4G."

He said the removal of height restrictions will allow operators to share equipment and reduce costs, something the industry has shown an increasing appetite for in its proposals for a shared rural network to improve 4G.

"We will be responding to the consultation and are glad the government is building on industry recommendations. We do believe having a shared rural network will go a long way to [improving] rural coverage, and planning will be part of that," he said.

James Barford, head of telecoms at Enders Analysis, noted that making masts taller in rural areas will have a direct impact on 4G, while widening bases will be necessary for the installation of 5G equipment - which is much heavier. He said the industry has long been frustrated by UK planning restrictions.

"[Operators] will probably get more bang for their buck with new taller masts than trying to extend existing masts. As they generally can't just increase the height without building the rest of it generally."

Operators might have to wait a bit longer for any changes to go through, though.

The consultation will close on 4 November 2019. However, the government noted: "Subject to the outcome of this consultation, we anticipate undertaking a further consultation on our detailed proposals, which would be accompanied by an Impact Assessment, if required." ®