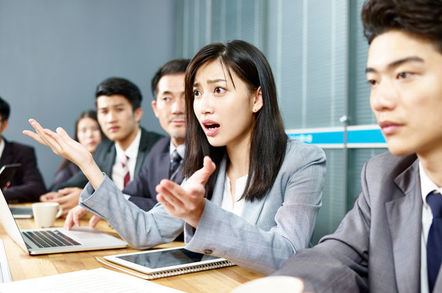 The Hong Kong ISP Association (HKISPA) reckons any moves by China to shut off the semi-autonomous territory's uncensored internet connection, African dictator-style, "would immediately and permanently deter international businesses" from staying in the one-time British colony.

Amid ongoing months of protests against the tightening noose of Communist Chinese laws and customs, Hong Kong residents have made increasing use of social media to both organise themselves and to broadcast images and video to the watching world.

Naturally, such uninhibited speech is kryptonite to the mainland Chinese and the HKISPA appear to have intervened in a public plea not to harm the territory's increasingly internet-dependent economy.

In a statement issued last night, the HKISPA said: "Technically speaking, given the complexity of the modern internet – including technologies like VPN, cloud and cryptographies – it is impossible to effectively and meaningfully block any services, unless we put the whole internet of Hong Kong behind [a] large scale surveillance firewall."

HKISPA specifically mentioned Telegram, the encrypted group chat app used to organise demonstrations in the city against the increasingly violent Chinese security forces. In June China DDoS'd Telegram, seemingly in the hope of stopping protests against a planned extradition law that would see Hong Kong-dwelling dissidents hauled to the Chinese mainland, and thus outside of the protections of local law.

The HKISPA's deliberate mention of a "large scale surveillance firewall" is a clear reference to China's infamous Great Firewall, the nationwide internet surveillance and censorship system aimed at ensuring that online discussions can only include Party-approved topics. It has been used by the Chinese government to block pictures of Pooh Bear, who apparently looks a bit like Chinese premier Xi Jinping. It also blocks VPNs, as Great Firewall architect Fang Binxing found out while giving a university presentation.

If this censorship system were to be imposed on Hong Kong, said the HKISPA, "any such restrictions, however slight originally, would start the end of the open internet of Hong Kong, and would immediately and permanently deter international businesses from positing their businesses and investments in Hong Kong."

The association said that Hong Kong now contains around 100 data centres "operated by local and international companies" and handles around 80 per cent of international internet traffic destined for the Chinese mainland, things that it said "rely on the openness of Hong Kong's network".

When we attempt to block one application, its users will shift to another application, which in turn we may have to block. The chase will never end, the users will still be able to communicate, but the open network of HK will be sacrificed along the way... Network censorship will only accelerate the loss of HK to competing cities.

The South China Morning Post, once an English-language bastion of reasonably balanced news from China but nowadays little more than a propaganda outlet for the country's government, published an opinion column calling the protestors "lawless" and moaning – entirely unconvincingly – about limited freedom of speech to condemn violence by protestors. It made no mention of the battalions of mainland Chinese paramilitaries who are mustering across the border in Shenzhen.

China's guarantee not to impose its communist laws and ideals on Hong Kong, written into the treaty that ceded the ex-colony to China, formally expires in the year 2047. ®