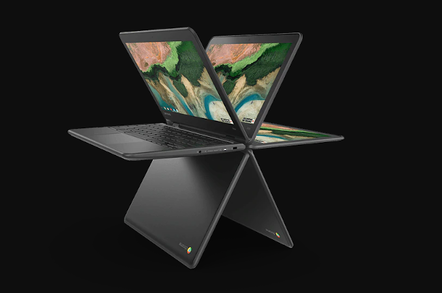 Hands On With a new school term fast approaching, The Register has got its claws on Lenovo's second generation 300e laptop, a device aimed fairly and squarely at students.

The first impressions are good. The 300e has the appearance of a robust beast: the chassis has rubberised edging, suggesting it should be able to withstand a drop or two at the hands of a careless youth. The trick hinge of the Yoga is also present and correct, permitting the crowd-pleasing move of folding the screen over and using the thing as a tablet, standing for presentations or in tent mode.

And there's also an optional pen.

Opening the lid reveals a glossy screen (some may prefer something more matte, but subjectively it's an attractive thing) and a trackpad surrounded by what, at first glance, looks like it might be brushed metal but sadly is just etched plastic.

That vague sense of disappointment continues with a press of the power button on the side (annoyingly located next to the volume control - we can imagine a few accidental shutdowns by the unwary) which fires up the machine to reveal a screen with truly epic bezels.

Think Microsoft Surface-sized bezels and you're getting close. The obvious excuse is that going edge-to-edge would make the thing harder to hold in tablet mode, but that doesn't hold true for the woeful resolution. The 11.6 inch screen has only a 1366 x 768 display.

To be fair, the target market is unlikely to care much and in use we didn't really miss the extra pixels found on the similarly small screen of something like the Surface Go. And the Intel 600 Graphics might struggle a bit, shunting too many pixels around.

That power-sipping Intel silicon also means that the poppets at who this machine is aimed won't be playing the latest and greatest 3D games. Minecraft, however, does run acceptably.

The pleasingly bright IPS screen is a 10-point multi-touch panel with a glossy sheen that is a magnet for sticky fingerprints. Lenovo boasts a student can write on the thing with a no. 2 pencil without fear of scratching or marking it. However, we'd suggest using the optional active electrostatic (AES) pen, thoughtfully located in the chassis, where it is also kept charged.

Also lurking within that chassis is an Intel Celeron N4100 CPU, clocked at 1.1 GHz, 4GB of soldered-on RAM and 64GB of eMMC storage. We found that sufficient for day-to-day office tasks, but the machine soon struggled when loaded up with too many apps and we're pretty sure we could hear someone at Google giggling as Chrome rapidly chewed through the meagre amount of RAM.

An 8GB version with a 128GB SSD is also available, and would be our choice.

As well as the 720p camera sat top and centre of the screen, the machine has a couple of USB 3.0 ports, a full size HDMI socket, USB-C for power and a combo mic/audio jack. A MicroSD reader is also present – handy for supplementing that limited disk space.

Lenovo claims the onboard three cell Li-Polymer battery should last for 10 hours. It took a couple of days of normal office app use before we had to reach for the charger, so the figure seems reasonable.

It is difficult to avoid a comparison with the similarly underpowered Surface Go. If the full-on Microsoft touch experience is what you need, the Go will set you back just over £550 with keyboard and pen: quite a bit less than the £627 Lenovo is asking for the second generation 300e.

However, that Go is unlikely to stand up to the 75cm drop the 300e is said to be "resistant" to, nor withstand a glass of water being tipped over the keyboard. And the 1.35kg Lenovo feels like a rugged bit of kit, although it might weigh down a student's schoolbag a bit.

That £627 cost is Lenovo's list price. The company told us that "certain third-party, Lenovo suppliers" will likely discount the thing. After all, the previous model can be had for less than £200 if you shop around.

Ultimately, Lenovo's second generation 300e will just about suffice as a student laptop, bought by those who want to be sure the kids don't go playing any games. Getting the 8 GB RAM and 128 GB SSD version should see it last a few years, but that price is inexplicably high for what is relatively low-end silicon. To the point that it's greatest challenge may come from Lenovo itself - the Chromebook version of this device (with the same CPU, RAM, 360 degree 2-in-1 screen and rugged chassis) is listed by Lenovo at £249.

So if you're paying Lenovo's prices, you could get your tame student the Chromebook version before sending him or her off on an educational trip to Alton Towers with a few of their pals, and still have change for a pint or two yourself. ®